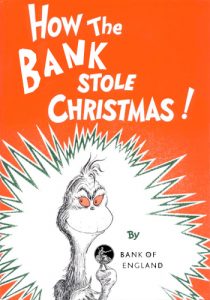 Bankers: when they’re not defrauding or dancing/not dancing about defrauding, they’re studying the prose style of Dr. Seuss — apparently!

According to Business Insider’s Ben Moshinsky, the staff at the Bank of England, has, in recent days, done some minor soul searching. After learning that only one in five people could read and understand the bank’s Inflation Report for May, and then agreeing that this is in fact a problem (kudos to them for that), the studious money guys hit the books, and landed themselves somewhere in Whoville, where the sentences have fewer conjunctions, more rhymes, and are legendarily easy to comprehend.

The bankers took to Seuss under the guidance of former Deputy Governor for Markets and Banking Nemat Shafik (who also goes by Minouche Shafik). “Dr. Seuss was a master at using simple language, at getting children to read,” Shafik reportedly stated in a speech given last Sunday at the Hay Festival of Literature in Wales. She went on to discuss struggling against the rising tide of populism, which prefers violent emotion to careful consideration, by using clearer, more concise language in bank correspondence and documents. Improving communications within an industry, especially one that uses language as notoriously opaque as that of banking, would help the many people the banking industry supposedly serves by making plain, or plainer, what banks are doing. Simply put, fewer confusing acronyms likely means a better understanding of exactly what the hell the bank is doing with your money.

Granted, heading straight for Dr. Seuss to improve oneself in the language arena is a little bit like, asked about your favorite book, half-consciously blurting out the only one you remember: All Quiet on the Western Front. Nonetheless, Shafik’s basic point is a sound one.

And it’s one that’s been made again and again. Most recently by Paul Romer, the World Bank’s chief economist and former manager of its research department. (That’s two “formers” in one blog post, for those keeping track.) In the Guardian, Romer remarked:

“[E]veryone in the Bank should work toward producing prose that is clear and concise. This will save time and effort for a reader. Thinking about the reader is an example of what I mean when I say that we should develop our sense of empathy.”

Following this suggestion (and after cutting a cool million from the division’s budget), Romer was sidelined (he’ll be replaced by Kristalina Georgieva next month).

Huh, I guess maybe not that many bankers want to be better understood. Can’t imagine why.