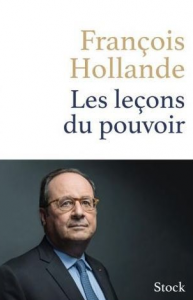 There is no read quite like a political memoir, especially from a head of state. A confessional it is not — rather, these doorstops give a chance for a former world leader to ease back into their chesterfields, scotch in hand, to list their many accomplishments, twirling the contents in their glasses on occasion to touch upon the harder, but still necessary, decisions they made during their administrations. If you stick around long enough, these once-powerful men and women often forgo posterity to take subtle digs at colleagues and staffers, even successors.

François Hollande’s presidential memoir Les leçons du pouvoir (The Lessons of Power) has just been released in France. Perhaps a more appropriate title would be Lessons in Cattiness. As Anne-Sylvaine Chassany of the Financial Times, and Henry Samuel of the Telegraph both note, the former French president was not shy in penning out criticisms against Emmanuel Macron, who succeeded him nearly a year ago. Take Hollande’s response to comments made by Macron in 2015 that “France was eternally nostalgic for the monarchy” and “the king’s disappearance had left a vacuum at the head of state”: “Those who say that people are looking for a king should never forget that they’re in a country that cuts his head off!” Sick burn, Hollande.

Here are a few of other barbs — less clever perhaps, but no less contentious:

“My government reduced inequalities. This one is worsening them.”

“I have always accepted political competition. But I think it should take place in the open and frankly let’s admit that was not the case.”

(The burnage is not confined to his book. “I could have beaten [Emmanuel Macron],” the former president once explained on television. “I didn’t want to.”)

All this is a bit surprising considering that Macron worked in Hollande’s Socialist administration before going rogue and founding his own party, En Marche. Hollande left office with the lowest approval ratings in French history. King points out that the approval ratings for Macron’s presidency, embroiled by rail strikes and a depressed economy, aren’t doing much better.