So, Elon Musk is getting dragged on the internet right now, and it is relatively glorious. Musk has done many things to earn the contempt of the screengazing masses, from falsely smearing employees who attempt to unionize to being one of history’s ickiest husbands to convincing his much cooler girlfriend to change her name to c to actually being named “Musk” (though this is, admittedly, not wholly his fault) to whatever the fuck this is. MobyLives has a proud history of not necessarily being above dunking on Elon Musk.

Well, friends, it is time to resume our horrendous and forbidden dances once again: let us gather together and behold as Elon is dunked upon afresh.

The dunking in this case comes care of the excellent radical publishing house Haymarket Books. Musk set them up nicely, with a series of tweets on Friday. As funny people always do, he began by whining that “those who proclaim themselves ‘socialists’ are usually depressing, have no sense of humor & attended an expensive college.” He followed up with the pithy observation that “Marx was a capitalist. He even wrote a book about it.” And then, in the style of many who control the means of production, crush unions, and dislike socialists, he went on to declare, “By the way, I am actually a socialist.”

The internet found this all too delicious a slurpee not to sip — but it was Haymarket that got the best of the syrup. On Saturday night, they tweeted: 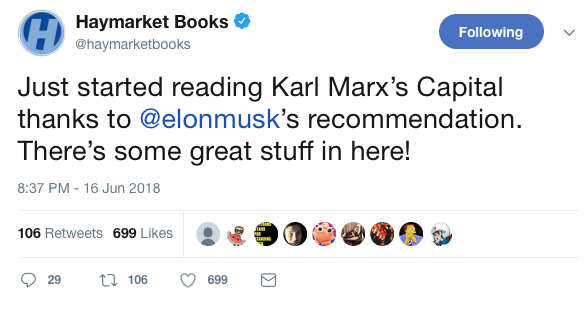 Cool, cool. Not much to see here — just some radicals making fun of Elon Musk’s decision to posture as an expert on socialism. I mean, it’s not like Elon Musk would ever answ— wait wait wait! What’s this!? 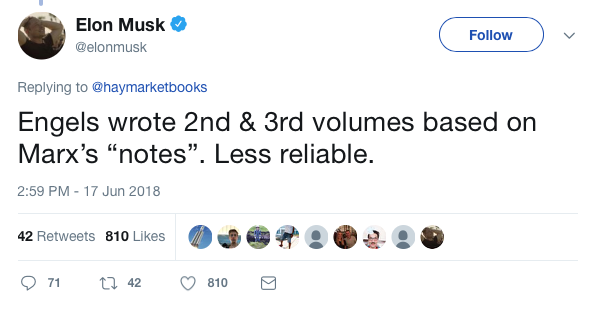 It’s unclear what Elon meant by this — was it just a joke socialists are too depressing to get? A sincere attempt at guiding new readers through the work of Communism’s dynamic duo? Another classic Ambien tweet? 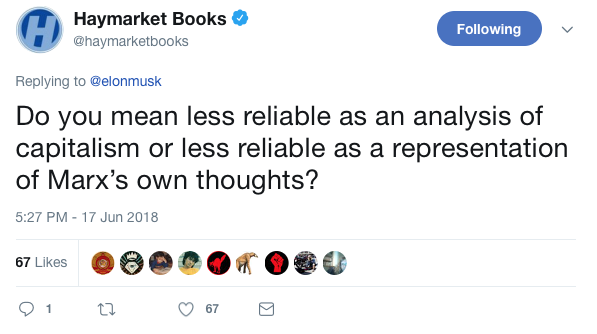 Which is actually a very chill question, and one whose answer could have explained a lot! But Musk did not reply.

For the record, Elon Musk can believe whatever he wants, and is probably more fun to ride into space with than some people. But because he now, after a childhood in the bloody family business, makes his living by controlling productive capital and exploiting the labor of others, there is no question that Big Papa would have called him, simply, unambiguously, a capitalist.

In other news, nothing is funny anymore and we live in a cold and terrifyingly incoherent hell now forever.

A harassment campaign continues at a small Communist bookstore