MobyLives has been covering Egypt’s depressingly long crackdown on intellectuals, writers, booksellers, and publishers for some time now, giving particular attention to the trials and tribulations of novelist Ahmed Naji. In 2016, Naji was arrested by Egyptian authorities for violating public morality in his 2014 novel The Use of Life, in which characters have sex and smoke drugs. Ultimately, Naji was released and his trial indefinitely delayed, but the state could at any point decide to continue their prosecution.

Naji’s experience is only one, high-profile example of the general diminution of artistic and literary autonomy that has been a staple of President Abdel Fattah el-Sisi’s repressive regime. Sisi, who seized power after a 2013 coup against then-president Mohamed Morsi, has been a persistent and powerful opponent of political and cultural dissent, promising Egyptians economic security and governmental stability in exchange. As is often the case in situations like these, authors, publishers, and advocates for the written word have found themselves frequent targets of the state’s repressive machinations.

Our own Basma Abdel Aziz, author of The Queue, wrote last year for MobyLives, “To know what steps need to be taken next [in Egypt], one must first be able to differentiate truth from lies, reality from distortion. For the time being, many things look vague, illogical, and even horrifying.”

In seeming agreement with this assessment is a more recent portrait given by Farid Y. Farid in an Atlantic piece titled “Egypt’s War on Books,” a chilling and familiar portrait of a literary community under seige. 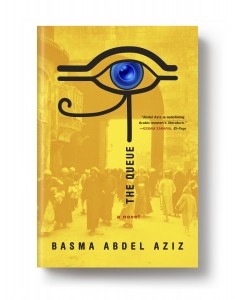 According to Farid, the situation has escalated in recent months. As we’ve written recently, a number of libraries—opened in the aftermath of the revolution by lawyer and activist Gamal Eid—were shut down under accusations of “seditious activity.” Eid himself has had his assets frozen, and is barred from leaving the country. In addition, Farid reports, thousands of websites have been shut down, a leftist activist has been sentenced to five years in prison for owning a copy of Karl Marx’s Value, Price and Profit, and a number of bookstores have been closed for possessing or selling “unregistered” books.

Interestingly, Soheir Almasadfa, chairwoman of cultural and publishing projects at the General Egyptian Book Organization, doesn’t necessarily think this qualifies as censorship. About her work at GEBO, Almasadfa told Farid,  “The book I’m publishing has to guarantee that there are no ideas that lead to militancy,” and that “I am also against publishing books that are responsible for the decaying civilizational moment that we are living in Egypt. These books belong on the curb.” At the same time, Farid claims that Almasadfa denied that “censorship was rife in Egypt.”

This bald self-contradiction is the foundation of fascist thinking, and it should terrify anyone interested in the stability of the Egyptian state, and the wellbeing of the Egyptian people. That it has found purchase in a body like the GEBO is profoundly discouraging.