“Does Ronald Reagan cause diabetes?”: Cause, by Gregory Smithsimon, is out today! 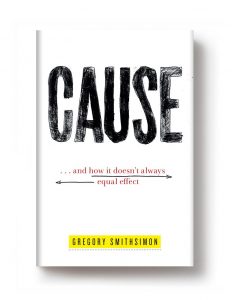 This is ultimately the question underlying many of our fiercest debates — from the reasons for poverty to the true nature of climate change. In Cause, which we’re delighted to be publishing today, sociologist Gregory Smithsimon demonstrates that often, when we ask Why?, the answer we get back is misleading at best. By bringing sharp new tools to the question of why things are as they are, Cause carries us forward to new modes, and new levels, of understanding just how we go where we are — and just where we may be headed.

Since “Because we said so” probably won’t suffice to get you hopping to the bookstore, we’re happy to offer this brief excerpt from the book, addressing an age-old question: Does Ronald Reagan cause diabetes?

A search for the causes of illness that stays inside the body has a limited opportunity to understand why bodies malfunction, or function in ways that hurt us. Even when an internal cause can be identified—a cell turned cancerous or a mutated gene—the inevitable next question is what caused that change. The search migrates outside the body, but that is terrain that microscopes and blood tests are poorly designed to explore. That’s probably why, for instance, 95 percent of cases of high blood pressure are listed as “idiopathic”—without identified cause—which in turn hints at why, even with an armamentarium of over 200 blood-pressure reducing drugs on the market, 75 percent of cases of high blood pressure remain dangerous and uncontrolled.

In the case of diabetes and obesity, there are no doubt multiple intermediate factors that aggravate the epidemic. Researchers have looked at unhealthy diet and lack of exercise, to be sure, and have also asked whether other contributing factors could be a more sedentary work life, genes shaped by environmental factors (called epigenetics), sleep deprivation, depression, a more climate-controlled existence, or the presence of synthetic hormones in the foods we eat. Yet all of these are discreet variables that can be measured in isolation without understanding the risk of risks. Each time one of these factors is identified, it begs that we investigate how social structures shape health risks. How does the social organization of our world put us at risk for a disease like this? If we recognized that how we organize society—things like job security, the types of jobs we do, the family structures we live in, the anxiety of being unable to afford better food at the grocery store—shapes our health on a massive scale, what changes would we make?

In the case of diabetes and obesity, we must ask why people gain weight. We eat differently when we’re worried, and research even shows that we do different things with calories, burning them or storing them, depending on our situation. In conditions of uncertainty, our bodies focus on obtaining and storing calories. That’s a useful reflex to have when winter is coming, burning them off as needed through the barren months, and emerging, thin, in late spring ready to gather another bounty. But when the stress is not seasonal but continuous, that weight gain can lead to chronic obesity and to diabetes and related health effects.

America started gaining weight in the 1980s. As researchers wrote in the Journal of the American Medical Association, “Over the period 1960–1980 (covered by the earliest NHANES surveys and the National Health Examination Survey), obesity prevalence was relatively stable, but then it showed striking increases in the 1980s and 1990s.”

The 1980s did indeed stoke insecurity. After the social progress of the 1960s, the 1970s saw economic stagnation and a flat rate of corporate profits. Unemployment skyrocketed to levels unseen since before World War II. Even with high unemployment, inflation continued and prices of everything from food to housing continued to rise. Despite rising prices, corporations feared that the postwar Golden Years that married high wages to high productivity and high profitability were near an end. Elites worried about the working class power of unions, the demands of civil rights first from African Americans but also, as the ’70s progressed, from Native Americans, Chicanos, and a second wave of the twentieth-century women’s movement. Around the world, liberation movements challenged both European colonialism and the prerogatives of American corporations to dominate the extraction of natural resources. In Iran, a rebellion against the US-supported dictator led to a revolution and a protest that overran the US embassy and held embassy staff and others hostage for over a year. It was an anxious time to be a rich white American man with a shriveling stock portfolio.

In 1980, Ronald Reagan ran for president on a promise to end that anxiety of the elite. He was not only good looking but firm and hawkish. Iran released the US hostages within minutes of Reagan taking office. The Reagan administration was hostile to the civil rights movement, the women’s movement, the environmental movement, and unions. Reagan argued that government programs needed to be cut, and that cutting taxes would give business more money to stimulate the economy.

Political scientists have taken to calling this right-wing response, which took various forms around the world, seemingly contemporaneously and independently, neoliberalism. Calling Reagan’s policies neoliberal is confusing in the American context, because Reagan inveighed against liberals (that is, the political left). But so it goes with labels sometimes.

By any name, neoliberalism increased insecurity in the United States in a wide range of ways in the 1980s and ’90s. Wages fell for middle- and low-income workers. Beginning in 1980, the minimum wage, which had been about $10 an hour in today’s money, began a sharp and prolonged fall. Social assistance programs like welfare and unemployment were under attack. As unions were pushed out of workplaces, employment became less secure.

Inequality between the rich and poor grew to levels not seen in living memory. As Richard Wilkinson and Kate Pickett show, in industrialized societies, a wide range of health indicators vary not in relation to how rich the country is, but in relation to the size of the gap between rich and poor. The greater the wealth gap, the greater the health gap. Countries with large differences in how much CEOs are paid compared to employees show higher rates of obesity and diabetes, and the United States has one of the highest inequality gaps.

The allostatic model, with its consideration of social factors, also encourages restraint in passing judgment about other people’s body types. In situations of uncertainty it is strategic, not maladaptive, for the body to store fat. While doctors, sociologists, and health professionals may feel secure about their economic prospects, the less advantaged may respond, consciously or not, to a condition of perceived insecurity. We should not assume that people are “wrong” for gaining weight. Rather than making radical interventions to insist that people lose weight (which might be ineffective, just as studies are showing that people who undergo liposuction surgery to remove fat gain back an equal amount of fat, but in new locations around their body), it would be worthwhile to attack the conditions of insecurity, and let people and their bodies adapt to the new conditions of security.

Cause is on sale now. Buy your copy here, or at your neighborhood independent bookstore.