2017 was a triumphant year for the short story.

Whether in the form of the gushing critical reception (and a spot on the National Book Award shortlist) for a collection like Carmen Maria Machado’s Her Body and Other Parties, or music of ka-ching-ing cash registers to the tune of fifty percent more books sold than the previous year, short stories sure seemed hot.

But over at the Guardian, Chris Power is asking us to power down our enthusiasm engines, or at least make sure they’re well-oiled and ready for the long haul.

2017, Power reminds us, wasn’t that different from years prior. In fact, all of this talk about the re-birth of the short story (navel-gazing about the state of the form, rather than an actual appreciation of its most stellar examples) is the surest sign that it was a year like every other.

In his breakdown of last year’s market for short stories he finds:

Collections by Tom Hanks, one of the world’s biggest film stars, and Jojo Moyes, one of its bestselling authors, represent 22% of that total: £1.3m in sales.

In the cases of Tom Hanks and Jojo Moyes, these books sold because of who wrote them, not because of what they are.

Only the most Panglossian observer could believe the tens of thousands of readers who bought Tom Hanks’s Uncommon Type, or even the sellout audience of 2,900 who attended his reading at London’s Royal Festival Hall, will all convert into committed readers of the short story. Likewise with Moyes. These books sold because of who wrote them, not because of what they are. In Moyes’s case, you could say fans bought her book in spite of it being a story collection; Still Me, her third Louisa Clark novel and the current bestselling hardback fiction title in the country, will doubtless outsell it many times over. Remove Hanks and Moyes from the equation and yes there has been an uptick, which is great news – but not the 50% year-on-year sales surge the papers are talking about.

Even the “Cat Person” phenomenon (i.e. the fact that we were all talking about nothing but Kristen Roupenian’s New Yorker short story for a whole week—ten years in short-fiction time—and that it’s already being made into a movie) is inadmissible as evidence in the case for the explosive short story comeback: it was readable for free, it paired perfectly with the non-fiction reading we were all also doing at the time, and the lucrative book contract it won its author was, in fact, for a novel (so often the shot to the short-story chaser in two-book contracts).

Powers laments the fact that we must always talk about a short story as a short story, subtly separating it from its supposedly more serious cousin, the novel. As he puts it: “I would love it if we could forget the form for a little bit and focus on the work instead.”

But Powers makes the enfeeblement of the short story collection sound like this is a case of marketing versus art, in which the bold claims made for collections (the yearly renaissances of the short story form cooked up in publishers’ board rooms) have drowned out the form’s inherent claims for legitimacy.

I would reframe this. Sure, those bold claims are a mostly-artificial attempt to drum up support for collections that book publishers care about, but they represent a necessary strategy in a publishing landscape from which the short story has all but disappeared — a disappearance that, at first, appears natural, but on close inspection turns out to be studiously learned. 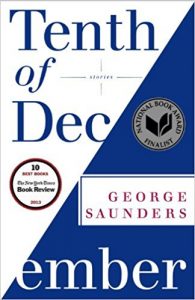 After all, the New Yorker (perhaps with a half-bow to Harper’s as well) is really the only mega-circulated publication that pays particular attention to the form within its parameters as a general interest magazine. This is a space where publications like The Atlantic and Esquire once loomed large. And when readers are forced to flex that short story muscle—think of the New Yorker’s early support for George Saunders, mega-famous long before he published his first novel last year—it can create an audience in peak physical condition to take on a great and daring collection, as it did for Saunders’s Tenth of December.

Imagine if we had several mainstream publications doing the same heroic work that our literary magazines do: keeping us exposed to cutting-edge short fiction a few times a month. I think the whole business of hawking and reading short stories would seem more natural, and we could (re)develop a vocabulary for the art that goes beyond “Holy shit! Short stories!”

We’d be like a misprinted calendar, we’d have so many tenths of December.

A winner was announced for the new(ish) Desperate Literature award