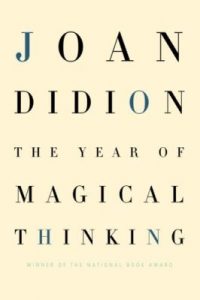 A Seattle theater company will be bringing Joan Didion’s gorgeous memoir of grief, The Year of Magical Thinking, to the stage this summer, according to Misha Berson for The Seattle Times.

Didion’s memoir was published after the sudden loss of her both her husband, writer Gregory Dunne, and their daughter Quintana Roo Dunne, in the span of two years in the early 2000s. As Berson writes, upon the death of her husband from a sudden heart attack after visiting their daughter in the hospital, Didion wrote to understand her own grief, “analyzing what it all meant, through personal revelation and intellectual probing, became essential to her own well-being.”

A Broadway play soon followed. Producer Scott Rudin helped Didion write a script for the stage based on the book. It resulted in a one-act, 90-minute solo piece. It premiered in 2007, and has played throughout the US and Europe.

Now, the ACT Theater production group in Seattle will premiere their own production of it July 19 through August 11. Berson writes, “veteran Seattle stage luminary known to mesmerize an audience: Suzanne Bouchard” will play the role of Didion.