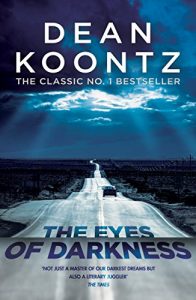 It’s an unlikely bestseller, but Dean Koontz’s thriller The Eyes of Darkness, first published in 1981, is experiencing an unprecedented revival. Currently number one in fiction on Amazon UK and number four in the US, it is outselling the likes of Hilary Mantel and Lee Child. Why? Because, according to a growing number of agog readers and social media users, it foretold the coming of coronavirus.

The story of a mother searching for her son whom she was misinformed was dead, the book describes a virus which originates in Wuhan, China. The Twitter-verse has consequently been freaking out, because of course that is exactly where COVID-19 originated. Last month, author Nick Hinton tweeted about the Koontz book, highlighting a passage which reads: ‘They call the stuff “Wuhan-400” because it was developed at their RDNA labs outside of the city of Wuhan.’

A Dean Koontz novel written in 1981 predicted the outbreak of the coronavirus! pic.twitter.com/bjjqq6TzOl

The clairvoyant theory has been gaining momentum online, resulting in the book suddenly re-hitting the bestsellers list. However, anyone with eyes can see from Hinton’s tweet the gaping transparencies in the claim. For one, the fictional Wuhan-400 was created in a lab as a biological weapon. As far as we know (although the conspiracy nuts will try claiming otherwise) COVID-19 is a virus that is naturally occurring and jumped from bats to humans via some intermediate animal host.

The book also says “It afflicts only human beings. No other living creature can carry it” and that it has a “‘kill rate’ of 100%.” Nope and nope.  The science proves otherwise, as this Forbes article highlights, also pithily pointing out what a crap biological weapon it is proving to be, if it indeed were one, saying:

Imagine being told that a bio-weapon might take the lives of 1% to 3.4% of the people that it infects but you don’t quite know specifically which ones…

‘If someone actually decided to develop SARS-CoV2 as a bio-weapon, that person needs to find a new job.

Delving further into publication history, the South China Morning Post has revealed that when the book was first published in 1981 under Koontz’s pseudonym Leigh Nichols, the virus had a different name. Called Gorki-400, it was created by the Russians, emerging from “the city of Gorki.” It was changed in 1989, the Chinese newspaper saying:

The book appears to have been rewritten after the collapse of the Soviet Union meant the country was no longer seen as a communist bogeyman.

So perhaps Koontz isn’t such a sage soothsayer after all. If you’re losing faith in him, here’s another prediction for you. Sylvia Browne was a self-proclaimed psychic and spiritual leader who died in 2013 and in her 2008 book End of Days: Predictions and Prophecies about the End of the World, she wrote of a pneumonia outbreak ravaging the world. In her own words:

In around 2020 a severe pneumonia-like illness will spread throughout the globe, attacking the lungs and the bronchial tubes and resisting all known treatments

For anyone having extreme anxiety about the #coronavirus my grandma, #SylviaBrowne, predicted this years ago in one of her books & it will quickly disappear. Sending love to you all. Hope this helps a little bit ❤️ #endofdays pic.twitter.com/VQPd60G2YM

Again, social media has exploded with amazed disbelief, and sales of End of the World have soared: it is the 2nd bestselling non-fiction title on both Amazon US and UK at the moment. If you want to believe Browne, there is further good news and, alas bad news to come:

Almost more baffling than the illness itself will be the fact that it will suddenly vanish as quickly as it has arrived, attack again 10 years later, and then disappear completely.

We can only hope it vanishes asap, and won’t be returning.

People sure do love a good conspiracy. Did Koontz and Browne predict coronavirus? Nah. But like a spreading virus, the online and even mainstream media attention these theories are creating sure is capturing people’s imaginations and shifting books.