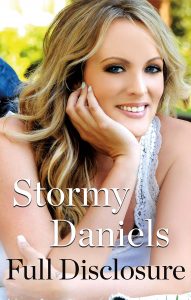 Joan Didion has called the work of Bob Woodward–whose expose of the Trump administration, Fear, appeared last week–”political pornography.” By this she meant it was a reductive (if gratifying on some primal narrative level) pursuit to reveal the one bug in a system that is otherwise humming along nicely.

St. Martin’s Press, which will release the book on October 2nd, calls it Full Disclosure.

McCarthy, in the first droplets in the slow trickle of information leading up to the book’s publication, writes:

A copy of the book, Full Disclosure, was obtained by the Guardian. In it, Daniels describes her mounting disbelief as Trump began to win primary contests in 2016 for the Republican presidential nomination. Former castmates whom she had not heard from in years, but who had heard her story about sleeping with Trump in 2006, would call her up to marvel at the news.

As I write this, the book holds a respectable #548 rank on Amazon. So we might call it a hotly anticipated title. But even that feels too vague in the current glut of Trump tell alls.

Purportedly light on actual politics, we might do well to call it something more like “character pornography,” an attempt to reveal the smoking gun that will at last show us that Mr. Trump is unfit to lead. This, of course, is ridiculous. With children detained in cages, whole swaths of the population feeling unsafe in Trump’s America, and the mere political viability of a Supreme Court candidate like Brett Kavanaugh, we know that the man and any of his enablers are unfit to lead.

Ms. Daniels, no doubt, has an interesting connection to the current administration, and her story is hers to tell. But as you read it, please remember that the murky details behind a hush payment might give you a cathartic shiver as you take a voyeur’s eye view to the belittling of Trump the man, but they do nothing to help the thousands and thousands of lives made immeasurably worse by Donald Trump the President.