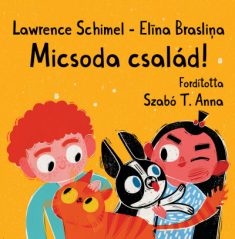 In 2020, Hungary passed a law preventing citizens from legally changing their gender. Later that year, they decided to ban same-sex couples from adopting children. Only last month, a law was passed in parliament banning any depiction of LQBTQ people from featuring in school educational materials or children’s television shows. And now the country, ruled by right-wing autocrat Viktor Orbán, has issued a fine to a bookshop chain for selling a children’s book deemed “corrupting” for daring to depict a rainbow family.

Pest County, a Hungarian local authority, has fined bookshop chain Líra Könyv 250,000 forints ($835.95) for selling Micsoda család! a Hungarian translation combining two titles by US author Lawrence Schimel and illustrator Elīna Brasliņa, Early One Morning and Not Playtime! The stories depict the daily routines of two children, one with two mothers and one with two fathers.

“The book was there among other fairytale books and thus committed a violation … There is no way of knowing that this book is about a family that is different than a normal family.”

“Rainbow families are completely normal, ordinary families … The story book presents simple, everyday stories, the sexuality of parents is not even a topic.”

Author Schimel told the Guardian that the idea for the books was to:

“celebrate queer families, to put more queer joy into the world, so that the only books available to children weren’t about conflicts…

“In these stories, the fact that the parents are two mums or two dads is incidental to the story, as it is to the daily lives of children in rainbow families. These families don’t only experience homophobia, they also have fun.”

Líra Könyv posted a statement on Facebook warning of the slippery censorship slope ahead should the local authorities keep acting in such a rash way. Nevertheless, they also declared that as a preventive measure, they would issues signs at the entrances to all of their bookshops, declaring “we sell books with different content than traditional ones.”

“This is my life, but because things are getting very insecure here, I feel I should do this from another country…

“There was one man who said, ‘You are not a man, you are just a faggot and you should die.'”

And yet the Huganrian government condones their homophobic decisions. A government spokesperson said on the passing of the recent new law, as reporter by the Guardian:

“There are contents which children under a certain age can misunderstand and which may have a detrimental effect on their development at the given age, or which children simply cannot process, and which could therefore confuse their developing moral values or their image of themselves or the world.”

Fierce opposition came from the EU, with European Commission President Ursula von der Leyen telling the European Parliament the law is “a disgrace” saying, “This legislation uses the protection of children as an excuse to discriminate against people because of their sexual orientation.”

As the BBC reported, the European Parliament went on to vote in favour of urgent legal action over Hungary’s new law, including a possible reduction in budget allocations to member states in breach of the rule of law and calling for Hungary’s government to be held accountable at the European Court of Justice. But how long will action take, and how likely is that to stop a bigoted, power hungry leader with who insists he is defending Hungary’s Christian values?

Burning the books, shattering the statue, of poet and holocaust victim Miklós Radnóti