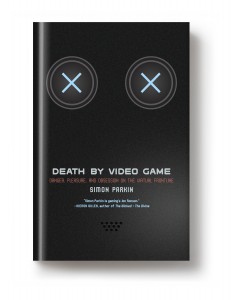 Somewhere, right now, a professional gamer sits before several screens. At least one computer to control their live video stream takes up much of the periphery. A full media system has been assembled to allow input from multiple consoles, screens, controllers, and devices.  The gamer pulls the two-armed microphone stand close enough so that the pop filter grazes their lips, and as they speak, a few green bars jump up the threshold meter. Clicking through several screens on their computer shows them the streaming input of the day and a console alight with other information about their fans. The rabid, unrelenting video game fandom that subscribes to their channel of near-constant video game bliss has been waiting — demanding to see more games played, more hours of vicarious virtual conquest.

This is the life of a professional gamer on Twitch, the Amazon-owned streaming video platform. One that can possibly lead to early death.

Last week Daniel Slotnik of the New York Times reported on one such Twitch pro. Brian Vigneault was no different than many. He built his channel by streaming for hours at a time to keep his fan base happy, and to keep them from switching to another gamer. After an almost twenty-four-hour session of a popular online game called World of Tanks, Vigneault died.

The causes of his death are not yet known, but suspicions are certainly raised. This story isn’t new. Chris Staniforth of the UK died of a blood clot after twelve consecutive hours of Halo. Lee Seung Seop of South Korea died of malnutrition and sleep deprivation after a fifty-hour Starcraft binge in 2005.  And there are plenty more stories about excessive video game play surrounding or causing players’ deaths.

The video game makes for an obvious suspect in these cautionary tales. Look at the player, sat there on the fat couch, motionless apart from the steady twitch of the hands, the unblinking eyes, the occasional grimace. This is not the lung-expanding, cheek-colouring variety of play we find on the playground or football field. It’s not obviously wholesome.

In my research for this piece (this is a lie, I really wanted to see the new Zelda game), I watched a popular Twitch streamer named KingGothalion. He has a particularly fascinating setup for his channel with a camera showing his torso and face, as the game he’s playing is projected behind him onto a green screen. And he looks the part with a scruffy beard, glasses, and a pallor that might be described in a morose Emily Dickinson poem. When I watched, he had thousands of subscribers tuned in and commenting as he roamed the landscape of Zelda: Breath of the Wild. Occasionally he’d glance toward his computer and thank someone new who had just subscribed, an important source of revenue for the pros, and a few times his attention would turn toward his real-life partner coming in to talk to him. Throughout, he was energetic, engaged, and quippy, narrating his journey through the game with off-the-cuff humor, sharing his exasperation at dying unexpectedly by the hand of some virtual ghoul. It reminded me of being a kid, taking turns with friends on a single-player game, everyone else watching and shouting opinions as to what the player should do next.

Yet, while KingGothalion’s story provides a model of success and vitality, the specter of disease, too, looms over the convention of video gaming streaming.

As Simon also points out, the deeper question isn’t what the results of the addiction are, but how people are drawn to it.

What provoked these young people to emigrate from reality into their virtual dimensions beyond the natural limits of their well-being? What convinced their brains to ignore the physical warnings in order to keep playing a video game? And—more fundamentally—what causes billions of humans around the world (the vast majority of whom don’t wind up injured or dead) to revisit them week after week after week?

Maybe if we can get to these answers, we can do something to help those suffering from the addiction.