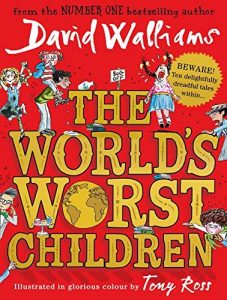 English comedian, actor, writer, and television personality, David Walliams, turned his hand to authoring children’s books in 2008 and has never looked back. His meteoric success has seen his stories embraced by children across the world, and he has sold more than 40 million copies worldwide.

However, one of his characters, illustrated by Tony Ross, has recently come under scrutiny, causing publishers HarperCollins to take action. Walliam’s short story collection The World’s Worst Children was originally published in 2016 and contains the story of Brian Wong, a Chinese boy “Who Was Never, Ever Wrong,” who wore thick glasses and was good at maths and was the “swottiest swot who ever swotted.”

Podcaster and writer Georgie Ma criticised the book on Instagram in February this year for normalising casual racism from an early age. She told The Bookseller:

“‘Wong’ and ‘wrong’ are two words that are commonly used in playgrounds to pick on someone if their surname is Wong. Even just the way Brian has been illustrated. He wears glasses, he looks like a nerd, he’s got small eyes … they’re all harmful stereotypes. The overall character plays on the model minority myth where Chinese people are nerdy, swotty and good at maths, we’re not confrontational and we’re high achievers. It was just really disappointing to read about that. Personally for me, because I have a toddler, I don’t want her being absorbed in these stories where Chinese culture is misrepresented.”

It seems HarperCollins listened, arranging to meet with Ma and Anna Chan from the Asian Leadership Collective, a foundation created to address the lack of positive East and South East Asian leadership representation in the UK. As a result, HarperCollins will now cut the Brian Wong story from the next edition of The World’s Worst Children, due out in March 2022. On the decision, the publisher put out a statement saying:

“In consultation with our author and illustrator we can confirm that a new story will be written to replace ‘Brian Wong’ in future editions of The World’s Worst Children… The update will be scheduled at the next reprint as part of an ongoing commitment to regularly reviewing content.”

But is this enough? While Chan was welcomed the outcome, she added, as reported by the Guardian, that the publisher can do better:

“HarperCollins has been reluctant to commit to anything further which holds them accountable and sets an example as a leader in consumer publishing. Asian Leadership Collective hopes that more transparent communication from HarperCollins will be released to the wider public on why the story is being removed and changed … We believe HarperCollins is more than capable in actioning the above and in showing that they are an inclusive, strong thought leader and ally on these issues. HarperCollins needs to be transparent and take accountability for the harmful narratives portrayed in their books.”

It is not the first time Walliams has been accused of portraying racist stereotypes. His hugely popular comedy sketch show “Little Britain,” written and co-staring Matt Lucas, ran on the BBC from 2003 to 2007. BBC iplayer, Netflix, and Britbox have all recently dropped the show amidst fury over its offensive content. Describing the situation, The Independent wrote:

“Little Britain has repeatedly come under fire in recent years for its reliance on blackface and yellowface for humour. Both Walliams and Lucas dressed up as black and Asian women for the series, playing characters including an overweight Caribbean woman and a mail order bride named Ting Tong.

“Other recurring characters have been accused of being ableist and transphobic.”

David and I have both spoken publicly in recent years of our regret that we played characters of other races. Once again we want to make it clear that it was wrong and we are very sorry.

Lucas and Walliams have publicly apologised for their portrayals in “Little Britain,” but Walliams is yet to comment on HarperCollins’ latest move. However, are apologies enough? Have lessons not been learned? While Ma has said she is “grateful” to the HarperCollins for “listening and taking action,” she also told The Bookseller there is still a long way to go, saying:

“I feel there are more stories within the book that need reviewing, but this is just the start… I want this to be a learning for all authors who write stories based on marginalised communities, to do their research and seek guidance such as sensitivity reads. Especially if they are not from that community.

“I think it’s great that authors and illustrators want to do books on different cultures.  But if they’re not from that background, they really need to consult those communities and do their own research to represent them fairly.”