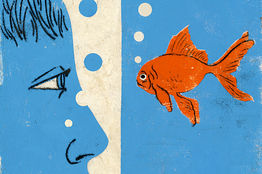 In an article over at the Millions, Kevin Hartnett has interviewed students from the 2005 graduating class of Kenyon College. These graduates are significant because they were present at what has become a cultural event in its own right: the commencement speech given by David Foster Wallace titled This is Water, which was later turned into a book.

Hartnett explains how the speech has gone on to have its own cultural life, finding an audience beyond the 2005 graduating class:

In the years since, the speech has come to play an important role in the way Wallace’s work is received and remembered.  Depending on who you ask, the speech is the clearest distillation Wallace ever gave of the themes that run through his fiction, or it is a powerful practical guide for how to live a good life, or—in the way the speech has been marketed since—it’s an example of how a vibrant, challenging artist can be packaged for mainstream consumption.

This is all well and good for those of us pre-disposed to care, but some of the kids graduating that day had no idea who the hell David Foster Wallace was. Which led Hartnett to pose the following question to himself: “What did the Kenyon grads think when they heard Wallace deliver it on that hot Ohio morning?”

A pretty basic question to ask, really. The graduation provided the occasion and context for the speech–who better to ask about the speech and its significance than the intended audience?

Here are a few of my favorite things graduates told Hartnett:

Mike L.:  The one emotion I remember is intensity: he was clear, driving, and inwardly focused.  He also didn’t say anything dismissively. Whether it was his technique or his real feeling I have no idea, but he read the speech like he was passing on a message of importance. Sitting here, I picture a guy at a radio in a bunker intercepting a message, then reading it off to someone else, wasting no time and enunciating every syllable.

Jackie G.: He seemed a little nervous at first. He also seemed like someone who had something to say that was worth hearing.  He was a little disheveled and didn’t stand up straight when he spoke.  He seemed earnest, like he really wanted to say something to us. Hoped he could say something meaningful or useful to us.

Gabe S.: My reaction immediately after the speech was “Holy crap that was awesome.” But what hit me the hardest about his speech was that it contained zero crap, zero preaching or ideology or politics or really anything at all that could even be taking as a suggestion. He stood there in front of us as one of the most humble people I’ve ever seen in front of an audience, and talked about life.  The fact that he prepared this speech for us made me feel incredibly honored.