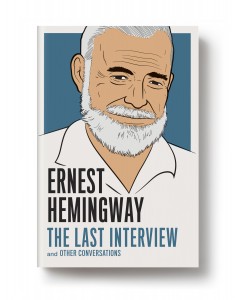 Let’s start with a book plug. In May 2019, Melville House will publish Ernesto, a period biography of Ernest Hemingway’s years as a celebrated resident of Cuba, and a book you should start caring about now because Havana’s famous Hemingway house is getting the serious preservationist treatment, according to Peter O’Dowd of WBUR’s Here and Now.

Hemingway’s Finca Vigía estate, a mere thirty-minute drive by top-down vintage car from downtown Havana, remains just how the American writer left it. Precious personal objects lay on tables; books and documents line the walls; Pilar, his yacht, is cradled nearby. Don’t even get me started on the observatory tower that doubled as Hemingway’s writing office. You can even purchase a Cubano from the food carts dotting the parking lot and go watch a game of baseball being played on Hemingway’s diamond. Baller before the term was coined.

A few years ago, when my wife and I paid a visit to Finca Vigía during our Havana honeymoon, it was easy to see how weathered the estate and its contents had become. Because the house is of high value, visitors are not allowed within it. As a compromise, all doors and windows on the single-story home are left open and one can safely peak at every item from a distance. What we were looking at was an improved version of Finca Vigía, which at one point had become so degraded from the salty air coming in from the nearby sea that the estate had been put on the list of America’s most endangered places. Even with efforts by the Cuban government to keep Hemingway’s house in good condition, some material needed a bit more than the basic effort. So they called in some Americans to help.

As O’Dowd explains, a preservation team comprising a construction crew from Detroit, along with the Finca Vigía Foundation (a US-based non-profit group dedicated to keeping Hemingway’s former home intact) are now working with Cuban architects and engineers to get Finca Vigía up to modern preservation standards. While the FVF were largely responsible for saving the house from termites and other maladies back in the early aughts, Hemingway’s library and papers remained exposed to the elements. The construction team had been called in to create a weatherproof vault that wouldn’t interfere or destroy the estate’s aesthetic.

“I first went there as a termite expert,” Bob Vila, the TV home renovation guru who also serves on the FVF’s board, told O’Dowd in a phone interview. “All the windows had rotted out, and they were making new wooden casement windows on-site.” Mary-Jo Adams, the head of the FVF, told O’Dowd that house’s out-of-time nature is part of its appeal. “The house is as he left it,” Adams said. “It’s as though he’s just gone for a swim in the pool and is ready to come back.”

Cuban-American relations are refreezing after an Obama-era thaw, yet if Ernest Hemingway can help the two countries set aside their differences, hopefully other commonalities can be found. To that, we can all raise a Mojito.