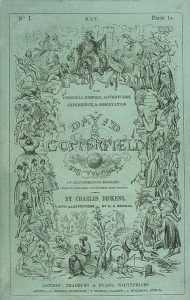 (Not the actual edition)

Imagine only having three books to carry you through seven months—and having to share them with your companions.

Such was the luck of the men of Captain Robert Falcon Scott’s 1910 Antarctic expedition, Alison Flood reports for the Guardian. Part of the crew reached the South Pole only to discover Norwegian explorer Roald Amundsen had beaten them there. They died on their journey back.

The rest of the group spent seven months buried in an ice cave, surviving off of penguins and seals—and reading David Copperfield to pass the evenings.

Claire Warrior, a trustee of the Charles Dickens Museum in London, told Flood that there was a long tradition of bringing libraries on expeditions. “Reading was an important communal activity which staved off boredom and built bonds between men living in challenging, cramped conditions with little personal space; Antarctica is rarely a place of solitude,” she said.

Unfortunately for Scott’s crew, they’d only brought three* books. Reading a chapter per night aloud, the men read David Copperfield over the course of 60 days. Though when the men were feeling “particularly sad,” said Frankie Kubicki, curator of the museum, “a doctor prescribed them two chapters a night.”

Warrior also told Flood the style of reading was ideal, as they were reading it the way it had been published—in installments. “It’s packed with cliff-hangers, which would have helped to keep interest high,” she said.

Incredibly, the group in the cave survived and made it back to New Zealand, David Copperfield in tow (complete with seal blubber stains and a “faint whiff of smoke and fish,” Flood writes).

The book will be available to view at the Charles Dickens Museum in London as part of the Global Dickens: For Every Nation Upon Earth exhibit, opening May 14.

*Editors note: For the life of me, I cannot find what the other two books were.