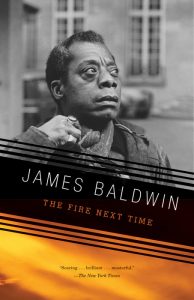 The Fire Next Time is just one of the books San Francisco bookstore patrons have bought for the stores to give away.

The resistance is bookish!

The sign in San Francisco’s The Booksmith shop read, “Read up! Fight Back! A mystery benefactor has bought these copies of 1984 for you if you need one.”

Indeed, Booksmith co-owner Christin Evans told CNN that a mystery customer had gifted fifty copies of George Orwell’s classic of authoritarian rule and doublespeak for any customers who may not have read it. When those copies disappeared within a day, other altruistic patrons donated copies of Margaret Atwood’s The Handmaid’s Tale and Erik Larson’s story of Germany’s first years under Hitler’s rule, In the Garden of Beasts. Copies of James Baldwin’s The Fire Next Time were bought by an anonymous customer, to be given out with purchases of The Fire This Time by Jesmyn Ward. 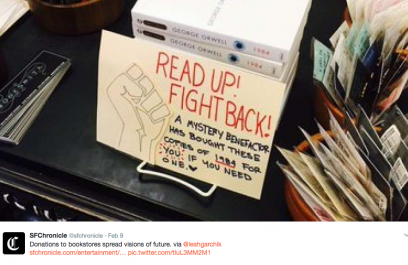 The original donations to Booksmith happened thanks to Stephen Sparks of Point Reyes Books, which had already received 10 copies of 1984 from the same generous reader. Sparks talked to Leah Garchik at the San Francisco Chronicle:

“It went over so well that the donor decided to expand the program,” Sparks said, so he put her in touch with Booksmith and Green Apple Books on Ninth Avenue. “And it’s had sort of like the snowball effect,” Sparks said. “There’s been so much interest in books about spelling out how we got to where we are. I think we shared it on Instagram and tweeted…. Friends of friends and supporters of the store have been coming out. For us it’s a really great way to promote really relevant and powerful literature, and to give things away.

We’ve suggested ourselves that everyone should do what they can with what they have, and, as Evans told the Los Angeles Times, this is a way for booksellers to play their role. “Bookstores believe greatly in the power of the written word to help inform, educate, inspire and persuade.”