Coming October 11th– Revenge: How Donald Trump Weaponized the US Department of Justice Against His Critics by Michael Cohen!

How Donald Trump Weaponized the Department of Justice Against His Critics 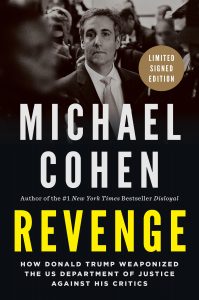 “I know Michael Cohen well enough to vouch for him to tell us the truth about Donald Trump and his experiences with Donald.”

On October 11th 2022, Melville House will publish Revenge: How Donald Trump Weaponized the Department of Justice Against His Critics (on sale October 11th, 2022; $32.50; ISBN: 9781685890544), by New York Times bestselling author Michael Cohen (Disloyal). In Revenge, Cohen tells the behind-the-scenes story of what can happen to you – and what really happened to him – when a President who believes himself to be above the law decides to go after his critics.

“I’m excited to be working with the team at Melville House,” Michael Cohen said. “The book is more than just a forensic dissection of what occurred to me, starting with the Steele Dossier and ending with an unconstitutional remand. It is a warning to all just how fragile our democracy actually is, and what can — and will — happen if we allow Trumpism to survive.”

Meanwhile, with the release of the Steele Dossier, Cohen also found himself battling endless news reports citing the Dossier’s claims that he’d had clandestine dealings with Russia — reports that only mounted despite his exoneration by the Mueller Report. In a story now being echoed in recent breaking news stories about IRS persecution of other Trump foes such as former FBI head James Comey and others, Cohen details — in his inimitable blunt language, with absolutely no holds barred and naming names — his attempt to clear his name and tell the truth about Donald Trump. Chillingly, he also makes clear what happens when you try to speak truth to power, and the power knows no bounds.

“I was introduced to Michael Cohen by our author John Dean, who impressed upon me that since Michael has come over from the dark side, he’s taken quite a beating for doing so, and from both sides,” said Melville House co-publisher Dennis Johnson. “This strikes me as an important story to tell, so we’re proud to throw in with him as he continues to reveal first-hand how an authoritarian president can lastingly corrupt a government — and as he fights the continuing perniciousness of Trumpism.”

Michael Cohen is the principal of Crisis-X, a crisis management company. He acted as personal attorney to the former President of the United States, Donald J. Trump, and before that was Executive Vice President for the Trump Organization and Special Counsel to Donald J. Trump. Since his release from the Otisville Federal Correctional Institution, he has written the New York Times number one bestselling book, Disloyal: A Memoir. He also hosts the top-rated news podcast, Mea Culpa with Michael Cohen, and has become a political commentator regularly seen on major news outlets. He lives in New York City with his wife and two children.

Revenge: How Donald Trump Weaponized the Department of Justice Against His Critics

Be sure to preorder a limited edition signed copy of the book–available at https://revenge-thebook.com/

Molly Donovan is the Marketing Manager at Melville House Publishing.