CNN’s Jake Tapper moonlights as a cartoonist for MAD 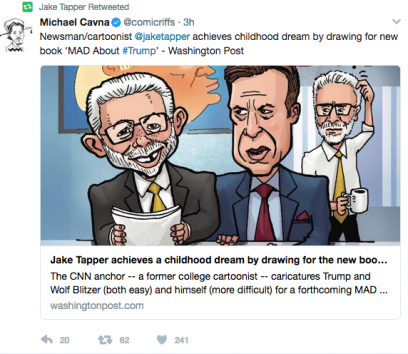 CNN anchor Jake Tapper has been getting a lot of attention recently for his coverage of the Trump administration. (He’s also been called “fake news” more times than can be counted—even by his seven-year-old son—and been the subject of a Saturday Night Live skit featuring an unhinged Kellyanne Conway that I’d imagine was fairly disconcerting for him.)

But Tapper has also fulfilled a longtime dream that has nothing to do with TV, contributing a cartoon for the new book MAD About Trump. Michael Cavna at the Washington Post reports that Tapper fell hard for the comics when he was a kid.

It was the bicentennial year, when he was an impressionable 7-year-old, and staring back at him from a glossy magazine cover was the Fonz, as rendered by the late great MAD artist Jack Rickard. The moment was, the CNN anchor notes, his own seduction of the comics innocent.

From then on, young Jacob Tapper returned to Fat Jack’s comics shop in Philly to score back issues and repackaged MAD paperbacks. And “from that date through my adulthood, MAD magazine has been poisoning my mind with its rudeness, disrespect and unadulterated nonsense,” Tapper writes in the foreword to the magazine’s forthcoming parody book, “MAD About Trump,” which is due out in June.

In college, Tapper drew a cartoon called “Static Cling” for the Dartmouth. He told the school’s alumni magazine in 2013 that cartooning had allowed him to “report and satirize” many of the debates going on on campus.

The MAD About Trump cartoon includes the newsman himself, alongside his colleague Wolf Blitzer and Trump.

Trump is most fun to draw — just a great mash of caricature-able features, from bouffant to eyebrows and scowl, to the high cheekbones and the regal pride,” the Washington-based Tapper tells The Post’s Comic Riffs. And “Wolf has such iconic features he wasn’t all that tough — which also made it easy to ‘Blitzerize’ Alfred E. Neuman.

For their part, the editors at MAD are thrilled about the collaboration.

“I took an informal poll around the MAD offices and, to a person, Jake was everyone’s No. 2 choice to write the book’s foreword,” MAD editor John Ficarra says. “Vladimir Putin was No. 1, but our repeated calls to the Kremlin went unreturned.”

“I think Jake has a great future as a professional cartoonist, and that’s a really good thing,” Ficarra says. “His association with MAD is pretty much going to kill his broadcasting career.”