On Wednesday, the UK became the first country in the world to declare a national climate emergency. This comes after weeks of protests took places across the UK and other European countries, led by activist group Extinction Rebellion (XR).

Parts of London were brought to a standstill last week as marches and peaceful demonstrations hit the capital. There were disruptions at Heathrow airport, and disturbances to public transport as protestors blocked roads and glued themselves to trains, with over 1,000 arrests. 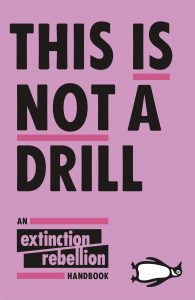 Now Penguin Books is rushing out This is Not a Drill: An Extinction Rebellion Handbook, an anthology by XR comprising of 30 original essays, due for publication on June 3.

So who are XR? The group apparently formed in early 2018 in Gloucestershire, England. Co-founder Gail Bradbrook told Kate Wills at the Evening Standard:

“We had a 25-step process coming up with the name Extinction Rebellion. To be honest we nearly fell out about it. There were some in the group who felt it was too strong, but we also knew people wanted something ambitious that would call this entire system into question …

We’re not just being dramatic talking about a human extinction—that’s the pathway we’re on. We have to look at the bigger picture. If your child had cancer and it was unlikely they were going to survive, you’d do everything in your power to fight it.”

The group now has an HQ in London with about 50 full-time workers and has raised over £200,000 during this latest period of activism. They have three demands they want the UK government to address:

This is Not a Drill’s editor, Tom Penn, told Alison Flood at the Guardian that the book will be split into two parts:

… the first looking at how “we’re in denial, and need to understand what the climate emergency means,” as well as “delving into the psychological trauma of what it means to understand our world is changing irrevocably.” The second is a handbook for activists, with stories by people Skeaping described as being “on the front lines of climate emergencies,” from a Himalayan farmer to a firefighter in California and the president of the Maldives.

London Mayor Sadiq Khan met with Extinction Rebellion this week, and the group put out a statement post-discussion, saying:

Sadiq Khan has already declared a Climate Emergency—thanks to the London Assembly urging him to. This is an important first step, but he needs to do more and in today’s meeting he recognised that. He said he will be a bolder champion of action on climate change in London and internationally, and agreed to explore the idea of a Citizens’ Assembly—our Demand 3—by convening a meeting with academics, stakeholders, and practitioners.’

The group also met with Environment Secretary Michael Gove this week which did not seem to go so positively, with XR member Clare Farrell reporting:

“It was less shit than I thought it would be, but only mildly … I was surprised to hear a radical reflection on our economic paradigm from Michael Gove when he talked about how our model is extractive and destructive—and that we need to move to a circular model. And that similarly a debt based economy doesn’t do right by young people, that it is creating a huge debt for them and that it has to change.

“Unfortunately what failed to emerge was an actual way forward.”

While MPs have approved a motion to declare an environment and climate emergency, this proposal does not legally compel the government to act. Labour Leader Jeremy Corbyn addressed protesters in London’s Parliament Square, saying, as reported by the BBC:

“We pledge to work as closely as possible with countries that are serious about ending the climate catastrophe and make clear to US President Donald Trump that he cannot ignore international agreements and action on the climate crisis.”

However, when the Environment Secretary for the country is reluctant to take action, is any actual change likely?

Melville House has firmly addressed issues of climate change, pollution and activism with books currently out that all concerned citizens should take to heart: long-time activist George Lakey’s How We Win on non-violent, direct action campaigning, Gary Fuller’s book on global air pollution and what we can do about it, The Invisible Killer, and The Climate Report, detailing the US governments findings on the state of climate change in the country.