“Civilization backup” on its way to the moon Ceremony at IAI by SpaceIL founders and engineering team, prior to installing the Lunar Library Disk into the spacecraft. CC BY-NC-ND 4.0

Corey Powell of NBC News reports that the Arch Mission Foundation is designing a “civilization backup” that will be sent to other planets and last at least 6 billion years. The first part was sent to the moon on Israel’s Beresheet Lunar Lander, which is scheduled to land in April 2019. According to a statement released by the creators of the Lunar Lander, the library includes religious texts, paintings, dictionaries on 27 languages, photographs, songs, books on art and science, and more. It probably includes at least one Melville House book, right?

The Arch Mission Foundation released a document that explains their mission and their project. My first question, which was answered in the appendix, was who are they making this backup for? The answer is … aliens! Kind of.

We are not designing for the inhabitants of another star system, although it is possible that if beings originating outside our solar system exist, they may visit our solar system and might encounter an instance of the Archive. We assume that any species intelligent enough to travel to our solar system from another star is more advanced than we are and is certainly qualified to understand the technologies we use to build Arch Libraries.

The Arch Mission Foundation’s dedication make me feel confident that the backup of the earth is in good hands. They even made the dedication look like the moon: 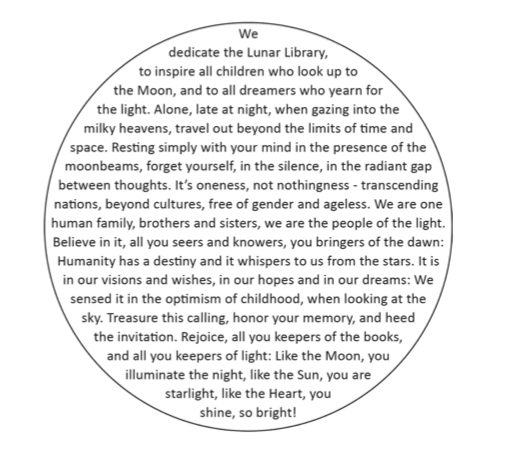