Think of Christmas and your mind, if it is anything like mine, may turn to dinner: to a juicy golden turkey, fluffy and crisp roast potatoes, rich gravy and a plump pudding steaming patiently, in wait for dessert.

Food, as it turns out, was often on the mind of one of our most beloved British writers, Charles Dickens. This may not come as a surprise when you think of the role food played in his books, from Oliver Twist asking for more gruel to Scrooge presenting the Cratchit’s with a huge turkey after seeing the error of his ways, but now a new London exhibition reveals food played a large part in Dickens’ real, as well as fictional life.

‘The exhibition will show that, when it came to parties and social events, Dickens had an eye on absolutely everything, so concerned was he to ensure that everything was perfect.

“We have handwritten notes to wineries, lists of contents of his cellar, invitations that would have been impossible to refuse, a note in which he organises the household condiments and a cheque book full of stubs showing evidence of party after party.”

It turns out Dickens was a stickler for detail, a serious planner and not a fan of tardiness. In this letter from December 1836, replicated in the Guardian by Vanessa Thorpe, a hungover Dickens anticipates the Christmas turkey to come with his friend Thomas Beard:

“My Dear Beard. We propose giving the Turkey until 4 tomorrow, in order that he may be well done. Be punctual and don’t place too much reliance on our excellent friend Warburton. I arrived home at one o’clock this morning dead drunk, and was put to bed by my loving missis. We are just going to Chapman’s sisters’ quadrille party, for which you may imagine I feel remarkably disposed.”

And, like so many of us today dining on Turkey for days and days and days, Dickens had to get creative with his leftovers, as he wrote in his thank-you note to his publisher on 2 January 1840:

“My Dear Sirs. I determined not to thank you for the Turkey until it was quite gone, in order that you might have a becoming idea of its astonishing capabilities. The last remnant of that blessed bird made its appearance at breakfast yesterday – I repeat it, yesterday – the other portions having furnished forth seven grills, one boil, and a cold lunch or two.”

(do I need to be ordering turkeys for all our authors…?) 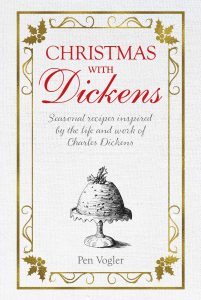 Co-curator at the museum, Pen Vogler, said to the Guardian’s Thorpe:

“The exhibition revolves around the experiences of the rich and poor, both of which are captured brilliantly in Dickens’s novels and both of which he encountered at different stages of his life.

“Food is everywhere in Dickens’s stories and almost always significant; consider the importance of Pip’s stolen pie in Great Expectations or the ‘prize Turkey’ that Scrooge gives to the Cratchits in A Christmas Carol. ‘Food, and the lack of it, is so central to Dickens’s work that it comes as a real surprise that the hunger of his childhood years was not revealed until his biography was published shortly after his death.”

Vogler has in fact written a book of season recipes, Christmas with Dickens, inspired by the life and works of the author and published by CICO Books, containing recipes for roast goose and chestnut mince pies; lobster patties and a Charlotte Russe (examples which you can read on the Independent website).