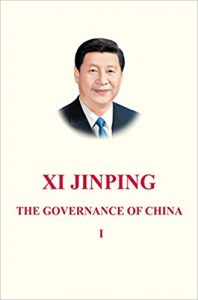 This past March, China removed its limitations on presidential terms. The immediate consequence of this legislative shake-up is that the sitting President of the People’s Republic of China and General Secretary of the Chinese Communist Party, Xi Jinping, can just keep on presidenting as long as he wishes.

A more tangential consequence is that Xi can also reign as the face of Chinese literature for as long as he pleases.

As Jeffrey Wasserstrom reports for the Times Literary Supplement, if you visited China’s booth at the recent London Book Fair, you might think that Xi was China’s only author. He writes:

Nowadays, the first thing I see in many Chinese shops is Xi Jinping’s smile, beaming out from copies of The Governance of China, a large cream-coloured book the first volume of which, published in 2014, consists mainly of speeches Xi gave after succeeding Hu [Jintao] as General Secretary in 2012 and as President in 2013.

In step with this, the Beijing official press claimed that the biggest event at the recent London Book Fair was the enthusiastic response—by, among others, Prince Andrew—to a slew of new foreign language editions of Volume Two of the same book.  This second part is made up mainly of speeches Xi has given since mid-2014. Photographs showed the Chinese display area in London filled with copies of The Governance of China, with each volume, no matter the language of the edition, sporting the same circular cover image of Xi.

This second volume especially is dedicated to celebrating Xi’s triumphs in office since 2013, and to painting a very rosy picture of the country’s future. Imagine a coffee table book of our president’s collected Tweets—with a strong focus on those about jobs and infrastructure, and an absence of those that harass private citizens—with some lightly nostalgic photos thrown in, and you’ve got a pretty good idea of the content.

So no, as Wasserstrom says, it’s not a page-turner.

It’s also not too similar to Chairman Mao’s famous Little Red Book. Xi’s “Big White Book” has less of a talismanic aura around it (perhaps its size alone keeps it from being waved like a flag at party rallies, or lugged to hospitals to help the infirm).

It is, however, one hell of a subrights project — at least if Volume One’s translation into twenty different languages is any indicator.