For so many Brits, Blue Peter was (and is) a seminal part of childhood. The longest-running children’s TV show in the world, first broadcast in 1958, its jaunty nautical theme tune marks the end of the school day, with families settling down in front of the telly-box at 5.30pm to watch a dose a live, wholesome entertainment.

Optimistic presenters teach and amuse kids for half an hour, interviewing celebrities, making Tracy Island out of toilets rolls and sticky back plastic and once allowing a baby elephant to run amok in the studio.

Blue Peter has always been a supporter of the arts. Kids from ages six to 15 can win a coveted Blue Peter badge by sending in interesting letters, stories, makes, pictures, poems, and their own good ideas for the programme. And since 2000, the show was been running the Blue Peter Book Awards, managed since 2006 by BookTrust, the UK’s largest children’s reading charity. Yesterday, on World Book Day, the 2019 winners were announced.

There are two award categories: Best Story and Best Book with Facts. This year, the shortlist was chosen by author and illustrator Alex T. Smith, vlogger Louise Pentland, teacher Darren Chetty and Blue Peter editor, Ewan Vinnicombe. The winning titles were voted for by over 300 children from 12 schools across the UK. 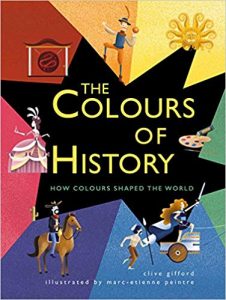 Best Book with Facts went to The Colours of History by Clive Gifford, illustrated by Marc-Etienne Peintre (QED Publishing) which takes a unique view on world history, exploring the stories behind different colours. On winning the prize, Gifford said to the BookTrust:

“To be recognised by a show I watched and loved as a child (and still do as an adult) is a remarkable thing. I’m tickled pink! I want to thank all the children who voted for The Colours of History. And a big thank to BookTrust for the remarkable work they do. Awards like these are so important in getting across how books with facts can tell incredible and important stories and excite, inspire and entertain young minds as much as fiction.” 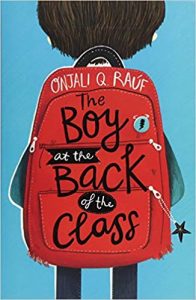 The winner of Best Story was Onjali Q Rauf’s debut The Boy At The Back Of The Class (Orion Children’s Books). A child’s perspective on the refugee crisis, it tells the story of nine-year-old Ahmet who had to leave his home country of Syria and is now trying to fit in at a new school. Rauf said on her win:

“What a wonderful, surreal, and truly epic honour it is to win this wonderful award! I can hardly believe that my childhood dream of owning a Blue Peter badge one day has come true in the most unexpected way possible!

“I am utterly bowled over by the love and support The Boy At The Back Of The Class has received, not just from the marvellous Blue Peter judges, but all the children who voted for its place as a winning title this year – thank you.”

We’ve had a fantastically strong selection of titles for the Blue Peter Book Awards 2019 and it’s great to see children from across the UK voting to decide the outcome. Congratulations go to Best Story Book winner Onjali Q. Rauf for The Boy at the Back of the Class which is such an informative and poignant tale about a subject that is very important to many children today. I’m also incredibly pleased we are able to present Clive Gifford with the award for Best Book with Facts. The Colours of History is such an original take on a history book, linking colours to amazing facts.

Given that in 2017 it was discovered only 1% of children’s books in the UK depicted black and minority ethnic main characters, it is heartening to see children and schools themselves pick The Boy At The Back Of The Class as a winner. Children’s publishers, take note–kids want to be able to see their realities in books.