Chicken Soup for the Juggalo Soul 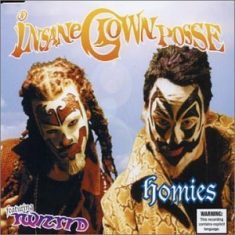 I do consume some media besides Cleveland Scene, but lately I have found that outlet consistently notable.

Last week for example, Eric Sandy, managing editor and staff writer for that paper, wrote a story that (at long last) determined the connection between Insane Clown Posse and the devotional book and spiritual guide A 2nd Helping of Chicken Soup for the Soul.

Insane Clown Posse, for the uninitiated, is a Detroit-based hip-hop duo who perform skit-heavy music dressed as spooky clowns and have constructed a Blakean cosmology called The Dark Carnival. This is a highly reductive explanation for a musical act that inspires the fierce loyalty of a nation of fans (called Juggalos, they indulge in symbolic rituals with the excellent soda, Faygo), stars in a franchise of parody films, and owns a separatist wrestling federation — but it will have to do.

Chicken Soup for the Soul was a 1990s publishing phenomenon that you should just ask your aunt about.

Now, the Insane Clown Posse guys are spiritually attuned. But what could they possibly have to do with A 2nd Helping of Chicken Soup for the Soul? As Sandy reports, an Ohio poet—and contributor to that edition of Chicken Soup—is suing the half of the Posse known as Violent J for copyright infringement. The poet Stanley Gebhardt alleges that Violent J read Gebhardt’s copyrighted poem “But You Didn’t” word for word in a 2007 Youtube video, and is seeking damages.

Here’s what we know: it’s unclear if the Posse ever made money off of the poem. A scuffle in the comments section of the video points out that Violent J never said it was his poem. The title of the video is “Violent J’s Poem.”

Check back for ongoing coverage.