If you really want to hear about it, you probably want to know whether there are lost manuscripts, meaning what lousy things the Family Glass got up to, if Esme ever got a glimpse of the squalor, how the hell Holden Caufield found a job at the age of twenty-six while still obsessed with necking, but I don’t feel like going into it, if you want to know the truth.

Since the 2013 publication of David Shields and Shane Salerno’s biography, and Salerno’s subsequent film adaptation (distributed by the Weinstein Company, boo), J.D. Salinger fans around the world have been expecting more. Matthew Haag notes in the New York Times this week that the film asserted Salinger, who published his last work in 1965, had kept up writing until his death in 2010, and left provisions in his will for the publication of that later work. The first writing was to come out between 2015 and 2020. No announcements have yet been made, but the eagerness of Salinger’s fans remains intense. Novels, short stories, scraps of paper stuck under his work desk. Give us anything!

Recent years have seen a steady stream of Salinger’s earlier writing, though.

Around the time the biography and documentary were released, Princeton University acknowledged that three unpublished Salinger short stories had been smuggled out of their Department of Rare Books and Special Collections. The pirated manuscripts found there way around the internet quickly. One story, The Ocean Full of Bowling Balls, describes the final days of Allie, Holden Caufield’s younger brother who dies tragically of leukemia at age eleven. 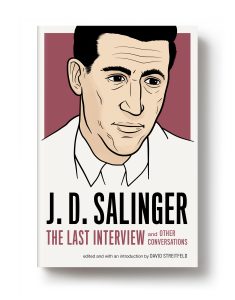 In 2015, we covered a legal dispute the J.D. Salinger Literary Trust was having with the Devault-Graves Agency over foreign rights to a short book of three Salinger short stories that had lapsed into the public domain. The 108-page compilation included some of the author’s earliest works — but these aren’t the manuscripts we’re looking for. (The lawsuit was later dropped.)

In 2016, we published J.D. Salinger: The Last Interview, which included a deposition Salinger gave when, in 1986, he sued his unauthorized biographer Ian Hamilton and Random House. During the questioning, Salinger—under oath—offers the following:

Robert Callagy (lawyer for the defense): At any time during the past twenty years, have you written any fiction which has not been published?

Callagy: Could you describe for me what works of fiction you have written which has not been published?

Marcia Paul (Salinger’s lawyer): You are talking about a general description?

Salinger: It would be very difficult to do. Work of fiction as I’ve always written fiction.

The exchange makes one thing clear: More writing exists. But what will become of it?

For his Times piece, Haag tried contacting the two principal managers of the estate, he didn’t get very far:

“Yeah, what came of those?” Matthew Salinger, the author’s son, said in a brief phone interview this month.

The author’s widow, Colleen O’Neill, interjected after answering the phone at her home in New Hampshire this month. “I’m sorry, I can’t take this phone call,” Ms. O’Neill said before hanging up.

True to Salinger’s reclusive nature, neither was forthcoming. Probed further, Matthew Salinger tells Haag only, “I would consider the source.”

As we wait to see what, if any, work will be forthcoming from Salinger, Haag ends on a cliffhanger: “As for whether Mr. Salinger’s fans should believe new books are coming, his son declined to say. Maybe one day he will reveal if any exist, Matthew Salinger said.”

Excerpt: James Baldwin: The Last Interview and Other Conversations

First J.D. Salinger ebook is out, from an indie publisher