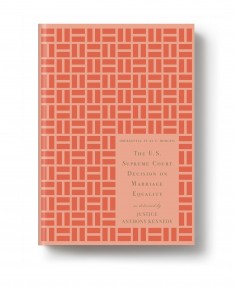 Two years ago today, we took a major step toward equality and justice when the Supreme Court issued its decision in Obergefell v. Hodges, the case that legalized gay marriage across the United States.

We were so excited at the time that we published the text of the decision, written by Justice Anthony Kennedy, in a hardcover gift edition (well, and a paperback). We thought then, and think now, that it’s a piece of enlightened civics worth celebrating — something we should have on our shelves and in our e-readers, give to our friends and spouses, find in our bookstores and libraries. Something that nudges our unions just slightly closer to perfection.

So today, to commemorate the Court’s most important civil rights decision in a generation, and because everyone looked pretty good (and rebellious) out there yesterday, we’re offering The U.S. Supreme Court Decision on Marriage Equality as a free e-book.

Kennedy writes in the decision:

No union is more profound than marriage, for it embodies the highest ideals of love, fidelity, devotion, sacrifice, and family. In forming a marital union, two people become something greater than once they were. As some of the petitioners in these cases demonstrate, marriage embodies a love that may endure even past death. It would misunderstand these men and women to say they disrespect the idea of marriage. Their plea is that they do respect it, respect it so deeply that they seek to find its fulfillment for themselves. Their hope is not to be condemned to live in loneliness, excluded from one of civilization’s oldest institutions. They ask for equal dignity in the eyes of the law. The Constitution grants them that right.

(It’s also worth noting that today marks the fourth anniversary of the Supreme Court’s decision in US v. Windsor, the case that enabled the federal government to recognize same-sex marriages performed in states that already recognized the right, and the fourteenth anniversary of Lawrence v. Texas, the case that made it illegal for state and local governments to prohibit gay sex.)