Bob: probably plotting something, isn’t he

This week, while the world was looking at other ‘more important’ stuff, cats were quietly going about their business. You know, playing with your shoelaces while you’re trying to put your shoes on; ignoring that expensive bed you bought them in favour of an old piece of cardboard; using the leg of your new sofa as a scratching post; infiltrating human society at every level to prepare for an eventual overthrow.

Having already taken up positions at the highest levels of UK government, namely 10 Downing Street and The Foreign Office (hello Larry* and Palmerston! Hi! Come here, you’re so cute! Oh, fine, suit yourselves), two stray cats who live outside the Hiroshima Onomichi City Museum in Japan have hit the news this week.

The museum revealed that the feline pair, who have not been named, have been trying to enter the museum for the last two years, only to be politely rebuffed by door staff with each attempt – as reported in The Evening Standard, among many other outlets (everyone loves a good cat story, come on). Japan’s fondness for cats, and cat-related products, is well-documented – and the Onomichi Museum is no different, reportedly producing merchandise in tribute to their furry visitors.

The story has blown up on social media, with thousands calling on the museum to let them in; the original tweet has now been shared over 86,000 times. However, as the museum at Number One Royal Crescent in Bath found out this week, letting cats in can cause problems: they tweeted this week that Alfie, a ‘naughty Crescent cat’, has been using the matting in the Housekeeper’s Room for keeping his claws sharp. ‘Woe betide he discovers the silk walls in the Withdrawing Room!’ Woe betide, indeed.

In further cat-domination news, Bob – the ginger stray and star of A Street Cat Named Bob, the multi-million selling book by James Bowen – has been touring the UK in support of his new book, The Little Book of Bob. However, Bob’s getting on a bit these days, so visitors are asked not to touch him or take flash photographs. Bless.

So there we go. In a way, it’s heartening to know that, in a few decades’ time, when Brexit and Trump are long-distant memories [Ha. As if. -ed], we can look forward to a world ruled by the benevolent hand of our feline overlords – who definitely won’t make us wait on them hand and foot with or play with gigantic car-sized balls of yarn for their entertainment.

I personally would welcome a world in which my only problem is where the next box of Dreamies is coming from; bring it on. 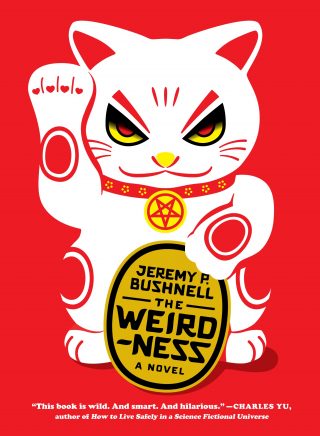 (As ever, here at Melville House we’re way ahead of the curve: Jeremy Bushnell’s The Weirdness (2014), contains more meta-fictional feline shenanigans than you can shake a fish on a string at.)

*BREAKING NEWS: as I write, Larry has released a statement declining Theresa May’s offer of the currently vacant (at time of writing) Brexit Secretary position. Is Larry a closet Remainer…?