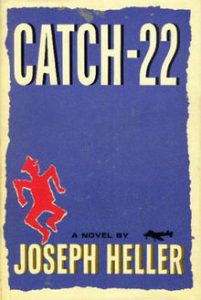 With the insane amount of entertainment made available to us now with streaming services, it’s no wonder film companies are looking back to classics for inspiration. Starting May 17, Hulu will air a six-series adaptation of Joseph Heller’s war classic Catch-22. For Variety, Daniel Holloway spoke with a few members of the cast and crew to learn more about the most recent adaptation.

Producing and starring in the series is the one and only George Clooney, who handpicked up-and-comer Christopher Abbott to play the desperately aware pilot Yossarian, who makes it his mission to save his own life and get out of the war alive (unscathed is a different issue).

Holloway quotes Clooney, “I’ve recognized a lot of things in Chris that I think are more mature than I had when I was his age, but the one thing where I see real similarity is in the way he can take this in stride and sort of be the captain of the ship. It was a big ship, and he had to be the captain of it. And he did it easily.”

Another aspect of his new adaptation is Luke Davies’s screenplay, which really highlights the novel’s “notorious nonlinear narrative,” and recasts the women characters in a new light.

Clooney and Heslov also felt compelled to bring women into key creative positions on the project. Among their most important hires was Ellen Kuras, who directed two of the series’ six episodes; they split the directing duties on the other four.

“We tried to be part of the solution as opposed to being part of the problem,” says Clooney, who also has a minor role in the show—marking his first new TV-series appearance since “ER.”