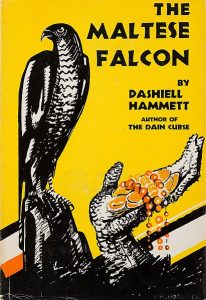 Do you love noir fiction, have $1850 per month, and could handle living in something (alarmingly) called a microstudio? If the answer to those questions is yes, then you’ll be excited to know that Dashiell Hammett’s apartment is available for rent in the Tenderloin district of San Francisco!

In a recent edition of Curbed Comparisons, Adam Brinklow points out that an apartment in 891 Post is available. Hammett lived at 891 Post from 1926 to 1929 while writing his first three novels: Red Harvest (1929), The Dain Curse (1929), and The Maltese Falcon (1930). As an added bonus to literary renters, Hammett based the apartment of The Maltese Falcon detective Sam Spade off of his own. Imagine wandering around your luxurious 255-square foot apartment as you read and touching the same walls as Spade, bathing in the tub where Spade strip-searches Brigid O’Shaughnessy (I must admit I haven’t read The Maltese Falcon, so hopefully you could reminisce about more consensual activities) … maybe. Turns out, there isn’t a record listing the particular apartment Hammett lived in, but according to Mark Coggins over at Mystery Scene, scholars have determined through a close reading of the text that Hammett and Spade likely lived in #401. Unfortunately, the ad doesn’t list the unit number so I guess the only way to know for sure is to ask to see the apartment. (Please don’t do this.)

The building was declared a “literary landmark” by the Association of Library Advocates, and Coggins was able to tour the famed #401 during the ceremony and his pictures appear to be of a different apartment. Perhaps it isn’t the exact apartment, but it’s definitely the correct building and it allows pets.

What's inside a book cover? More than just pages

SLIDESHOW: What would Humbert Humbert's 'Wanted' poster have looked like?