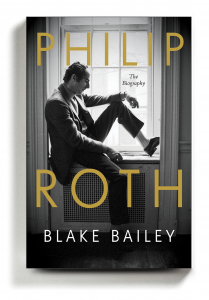 The latest in a long line of books being dropped amidst moral scandal is Blake Bailey’s new biography of Philip Roth. Published last month in the US, Philip Roth: The Biography hit The New York Times bestseller list. It received a lot of positive reviews, but those of a critical nature chastised Bailey’s sympathetic portrait of Roth and his questionable relationship with women. A questionable relationship, it turns out, that is shared by Bailey. Just weeks after the biography hit the shelves, stories came to light from numerous women accusing Bailey of sexual harassment, grooming and assault.

Bailey worked at Lusher Middle School in New Orleans in the 1990s, teaching eighth grade English. News broke in the The Times-Picayune/The New Orleans Advocate last month as three of Bailey’s former students came forward with stories of  sexual abuse. One of the victims, Eve Crawford Peyton, wrote a personal piece for Slate, describing her experiences, including her rape by Bailey in her early twenties. She writes:

“He was a fantastic teacher; he was a sexual predator…

“I know now, with the advantage of being 40 and having my own two daughters, that his attention to us was not actually flattering or normal. But at the time, he told me—told all of us—so many nice things about ourselves that we wanted to believe…

“Then I learned about the others. It started on a private Facebook group of New Orleans women, prompted by the absolute inescapability of his Roth biography. One by one, women from many different years of his class started sharing our stories. There were so many of us. We were ready to talk.”

The story in The Times-Picayune was followed by two women telling The New York Times that they had been raped by Bailey, one as recently as 2015.

“Mr. Bailey has never acted inappropriately with any student and has never received any complaints about his time at Lusher more than 20 years ago.”

“It is absurd to suggest that he was grooming students for anticipated encounters as adults many years later. The allegations in your email are false, hurtful descriptions of conduct between adults. Mr. Bailey has never treated a woman inappropriately and has never forced himself on a woman.”

Despite the denial, Bailey was dropped immediately by his literary agency, The Story Factory, and WW Norton made the decision to halt promotion of his book. A week later, they pulled it entirely, along with Bailey’s 2014 memoir The Splendid Things We Planned.

But in a twist all too familiar to us by now, Skyhorse Publishing, the same publishers who bought up the rights to Woody Allen’s biography, will be bringing out the book on 15th June. Skyhorse also publish such morally upstanding gentlemen as Donald Trump’s former lawyer, Michael Cohen, and Trump defender Alan Dershowitz. The president and publisher of Skyhorse, Tony Lyons, said in an email to the The New York Times on the acquisition that:

“a biography must be judged by the quality of the writing, the importance of the subject matter, and the value of the scholarship…

“This is obviously an important and comprehensive book about an author The New Yorker called ‘a literary genius… I’m proud to publish it.”

Literary geniuses can also be assholes and a biographer should also be judged by how rapey they are (while many allegations have been made by many women, no charges have been brought against Bailey as yet, fyi).

WW Norton has pledged to donate the same amount paid to Bailey as a book advance to “organisations that fight against sexual assault or harassment and work to protect survivors.”