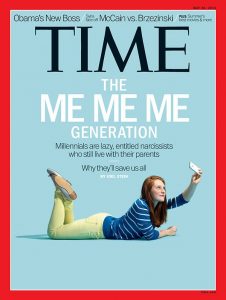 “Millennial.” It sounds like a class of elusive flower that blooms once every thousand years.  And while we know the word actually refers to the demographic born between the early eighties and the early aughts, we do tend to think of it derisively as something like that flower: a fragile, much-theorized-about species whose emergence was only possible for this precise window of time.

So integral is that not-so-flattering connotation to the word that Buzzfeed—the expanding online media outfit by and for millennials—included in their 2013 house style guide the rule that, should the word appear in their publication, “it should have real or implied quotation marks, or appear as a term of art, and with kind of a wink.” It was a word meant for marketers promising us killer apps (well, promising us happiness in the form of fulfilling careers in the arts and blissful monogamy, but selling us killer apps) and eye-rolling self-consciousness.

As Emmy Favilla (the website’s copy chief) and Megan Paolone write for Buzzfeed:

The only people who didn’t immediately adopt millennial were… millennials themselves. Many (particularly, perhaps, those on the older end of the millennial spectrum) rejected the term and its associations with entitlement, narcissism, and short attention spans — along with a general distaste for being squeezed into tiny little boxes by the marketing industry.

Well hate thyself no longer, millennial! Thanks to its increased traction in the spoken language, a number of think pieces about how being a millennial ain’t so bad, and a judgement-free definition in Merriam-Webster, the word has lost a good bit of its stigma. At least according to Buzzfeed’s style guide. Indeed, Favilla and Paolone conclude their piece with this:

And today we are today flying the white flag, announcing our surrender to the term’s unironic usage and acknowledging its journey from cheesy marketing buzzword we tried desperately to combat to just another everyday descriptive word in our vernacular. (But please make sure you use two n’s and lowercase it, per BuzzFeed style.)

MobyLives style remains “call me what you want, just don’t call me late for dinner.”