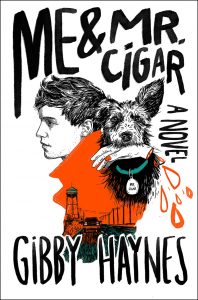 Gibby Haynes, singer of the psychedelic band Butthole Surfers, has been called “the weirdest man in show business.” We could cite a number of naked or tripped out incidents to bolster this claim, but I think my favorite piece of evidence would be the interview he gave while getting a tooth filled in the documentary The Devil and Daniel Johnston.

Soon, Haynes will either be bidding to be the weirdest man in Young Adult literature, or angling to leave that reputation behind as he publishes his first novel Me & Mr. Cigar.

From legendary Butthole Surfers front-man Gibby Haynes comes a darkly humorous speculative YA debut about a lost Texas teen and his supernatural dog, and the power of found family.

For the past five years seventeen-year-old Oscar Lester has never been without his dog, Mr. Cigar. The two have made a pretty good life for themselves in North Texas. Oscar spends most of his time organizing drug-fueled dance parties with his best friend, Lytle Taylor. And all three benefit from the care of Carla Marks, the genius behind the mysterious IBC corporation. Oscar’s deceased CEO father “discovered” Carla, though Oscar’s mother spends all her time with her new boyfriend. As for Oscar’s older sister, Rachel … she fled Texas after Mr. Cigar bit off her left hand. Oscar was twelve. But he alone knows now as he knew then: his beloved pet is no menace. Mr. Cigar is a supernatural companion.

After years of silence, Rachel—now a twenty-two-year-old artist living in New York—phones Oscar out of the blue. She’s being held hostage and will only be released if she pays a debt she owes. At the same time, Carla Marks warns Oscar to get out of town. Nefarious forces are after his dog. Suddenly Oscar, Lytle, and Mr. Cigar find themselves on the run to New York, to save Rachel and to save themselves. And in the end, the truth of Rachel’s circumstances ultimately uncovers the truth of Oscar’s own … and the truth about Mr. Cigar.

Indeed, it seems like we can expect some more drug-fueled action from Haynes. The book will be available January 2020 from Soho Teen.