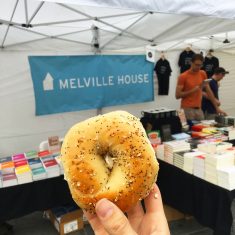 This past week, all of Brooklyn’s lovely people came together once again to celebrate books—those weird little paper-and-glue objects distilled in the cask of thought and wonderment that is the human brain—and their writers (the wielders of these brains). This has been the borough’s habit for some time now, but it was a mere twelve years ago, in 2006, the practice was made official as the Brooklyn Book Festival.

Over the course of this year’s Festival—it ran from September 11th to September 17th—readers were given the opportunity to listen to a wide range of prominent authors and thinkers — from Patti Smith (author of M Train and Just Kids, Rimbaud devotee, and occasional Bob Dylan surrogate) to Colson Whitehead (Underground Railroad) to Karl Ove Knausgaard (My Struggle) to Jonathan Lethem (More Alive and Less Lonely, Chronic City) to Akhil Sharma—speaking on an equally wide range of topics. Younger writers, too, were welcomed to the Festival’s stages: Tracy O’Neill (The Hopeful) and Anelise Chen (So Many Olympic Exertions) had a conversation about non-traditional sports narratives, and Eugene Lim (Dear Cyborgs), Malka Older (Null States), and Deji Bryce Olukotun (After the Flare) joined legend N.K. Jemisin for a conversation about politics, sci-fi, and resistance moderated by the Center for Fiction’s Rosie Clarke.

Lots of other cool shit happened too. Verso put on a panel called “What Ever Happened to the Public Intellectual?” Now you know. The Baffler pointed out the cracks in our utopias. Consider yourself aware of the cracks in the utopias you’ve been sold. ISSUE Project Room and the London Review of Books celebrated the cornetist and composer Lawrence D. “Butch” Morris’s “radical black composition.” That’s fucking specific and amazing. Deirdre Coyle, Kim Foote, National Book Award nominee Carmen Maria Machado, Joanna C. Valente, and Cooper Wilhelm had a conversation about gender identity in speculative literature. Hell yes. A gang of illustrators got together to talk about drawing animals. That’s very cute and interesting.

So, in short, it was awesome. Really, really awesome. We were there on Sunday, for the “Literary Marketplace” portion, with our books, for the twelfth year running (that’s all the years, folks). The weather was predictably sticky. But the bagels were pre-sliced. And the books were good. So we hunkered down and told all passersby about our titles. We shouted about the latest (A Citizen’s Guide to Impeachment). We swore and smiled about the greatest (Future Days, Red or Dead, First Love, The Apostle Killer, These are the Names — the list goes on and on and on). We—did I mention this already?—sweated profusely. We laughed with strangers. We cried with strangers. We said the word “dongle” five hundred times (that’s 500 times too many!).

Most importantly by far, we met a whole lot of the people who support us and make what we do here possible. We talked to you about books, and authors, and Twitter, and using reading and publishing to resist Donald Trump (our co-founder and co-publisher, Dennis Johnson, even moderated an event with Women’s March co-organizer and What We Do Now contributor Lynda Sarsour, as well as L.A. Kauffman, author of Direct Action). It was, friends, in the beginning, in the middle, and in the end, a very good and very exhausting day. We thank you for it.

Later, in the eve, we filled our bodies with labnah and beer. And spoke only of this day, which, sadly, was fast coming to a close.