We have a date. Article 50 – the clause in the the Lisbon Treaty that allows a member state to formally begin the withdrawal process from the European Union — will be triggered next Wednesday, 29th March.

The clock then starts ticking, and the complex negotiations for the United Kingdom to leave the EU can begin. The process is supposed to take two years, but many experts believe it could take longer. In 1982 Greenland, a country with a population of under 57,000 people whose economy is largely supported by one main industry (fishing), voted to withdraw from the European Economic Community, a predecessor of the EU. The process took three years.

Once Article 50 has been triggered, it is expected that the EU’s draft guidelines will be published within forty-eight hours. EU member states will hold a summit to discuss Brexit a month later, on 29th April. The UK, of course, won’t be attending, because we’ve made our very messy bed and now we have to sleep in it.

And that is as far as we seem to have got with a “plan,” the way forward still being as clear as mud. The reality of how Brexit will effect the economy, business and our daily lives is still unknown.

Last week saw publishing professionals gather at the London Book Fair to negotiate foreign rights deals and find the “next big thing.” In January I wrote about the coming onslaught of BrexLit, with authors inspired by Brexit including Ali Smith and Mark Billingham. And, unsurprisingly, Brexit books continued to be talked about at the fair, which saw the announcement of a political thriller from Boris Johnson’s father, Stanley Johnson — Boris of course being the figure who lead the Leave campaign, along with fellow offender Michael Gove, then legged it when the reality of what he had done really set it, leaving Theresa May to take charge and clean up his mess.

The book, Kompromat, is being published this September by Oneworld, who describe it 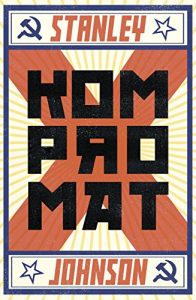 The UK Referendum in June 2016, on Britain’s membership of the EU, was a political showdown a British prime minister thought couldn’t be lost. But the next morning Britain woke up to a shock result. Kompromat explores the skullduggery that might just have gone on behind the scenes.

“[Boris] was of course a figure in the campaign and maybe there will be some people that will say they can recognise him [in the book] but this is fiction.

“My ambition is not to write history, it’s to write something readable, hey – it’s just meant to be fun.”

Let’s wait to see if one of the main characters is a blond-haired man playing the part of bumbling buffoon who fucks up the country and gets made Foreign Secretary as a reward, to really solidify those foreign relationships he’s shown such passion for.

While BrexLit continues to spread, Stig Abell, editor of the Times Literary Supplement, tells Spencer the landscape is so uncertain that it’s hard to say which novels will leave a lasting impression and which will fade into obscurity, as Brexit realities finally come to light.

“The problem with Brexit is it’s such a moving target. The Britain you’re describing in 2017 might be very different in 2018.

“Things that try to capture the spirit of the age could be very exciting.

“That might mean science fiction. Look at the book that’s done brilliantly since Trump became president, that’s 1984. George Orwell wrote Animal Farm about communism, he made it a fable, so I think what we’ll probably see is the tone of Brexit might get transmuted into other things but it’ll be there.”

Onward we go, into the unknown.