Brexit explained, via the medium of Ladybirds for Grown-Ups

*brucked (according to Urban Dictionary) 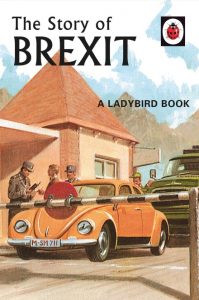 When you intentionally vote “Leave” during Brexit and accidentally fuck yourself.

“Hey Bro, did you vote ‘REMAIN ‘?”
“Nah mate, I totally brucked myself! Turns out the pound crashed to a 30 year low. Food and holidays got more expensive, so I can’t afford to get shitfaced in Kavos, not to mention I require a visa, and my grandpas pension is fucked. Who knew!? Oh wait…” #brexit

It has been two years and 125 days since 51.9% of the UK voted to leave the European Union. We are supposed to leave promptly at 11pm UK time on Friday 29th March 2019, presumably handing back our keys and driving off into the sunset with a big box of our stuff that we’re delighted we have back to ourselves. We will get a ‘transition period’ from 29th March up until 31st December 2020 to get our ducks in a row, so I guess we’ll be keeping the EU’s number in our phone for late-night drunken calls. But to get to the transition period we have to agree to a deal in the first place. Which is 95% in place apparently, according to our Prime Minister Theresa May. Does this fill us all with confidence? Errrr… no. Because as Alex Hunter and Brian Wheeler neatly summarise in their BBC article ‘Brexit: All you need to know about the UK leaving the EU‘:

‘Do we know how things will work in the long-term?

‘No. Negotiations about future relations between the UK and the EU are taking place now. Both sides hope they can agree by mid-November an outline of how things like trade, travel and security will work. If all goes to plan this deal could then be given the go-ahead by both sides in time for 29 March 2019.’

Basically, none of us know what Brexit means or the implications it will have for the future (#brexitmeansbrexit… duh.)

As we plummet towards futures unknown (we do know that hate crimes in the UK have increased by 17% in the last year and we’ve nicely buggered the value of the British Pound), Ladybirds for Grown-Ups has taken full farcical advantage of the situation by publishing, just yesterday, the penultimate book in the series, The Story of Brexit written by Jason Hazeley and Joel Morris. On the decision to tackle the impenetrable subject of Brexit, Hazeley told The Guardian’s Mark Brown:

“We did about a year and a half of literary festivals and we got asked so many times – when are you going to do a book about Brexit? – that we eventually concluded it was the will of the people.

“We are living in a time when we have a huge political upheaval coming thundering at us and at the same time, I would say, we’ve got a lousy government and a lousy opposition. It does feel like we’ve been left swinging in the breeze.”

The series has been hugely success worldwide, selling over 4.5 million books. Pairing artwork from original children’s books with witty and often topical jokes and jibes with volumes including The Hipster and The Mid-Life Crisis, this new edition is perhaps the most political and cutting yet. The Guardian website features a page from the book, which reads thus:

“The day after the referendum, Helen woke to discover that she shared her country with millions of simply awful people she had never met who thought the exact opposite of her about most things.

“Helen wonders if there could be a referendum on those people leaving instead.”

I feel your pain Helen.

Perhaps the book might inadvertently shed some light on a political apocalypse which most grown-ups have no clue about, whether you voted leave, remain or are an innocent, flabbergasted bystander. It will at least provide some light relief to distract us from the fact that we’re all brucked.