In true X Factor style, the UK has spent the last few weeks watching ten MPs battle against each other to become the next Prime Minister. Subject to various TV and media grillings, the wannabes have now been whittled down to two, with the “winner” being announced on 23rdJuly. Will it be bumbling public favourite Boris Johnson or Jeremy Hunt (whose name is so hard to say cleanly, articles have been written about it linguistically).

“The people” love Boris. He, like David Cameron and Jacob Rees-Mogg, is from a privileged background and was Eton and Oxford education, but unlike his fellow tories, he is somehow viewed with fond affection by many. As London Mayor from 2008 to 2016 the Guardian reported that “Johnson championed eight high-profile projects that either ended in failure or turned out to have questionable value. Between them they had cost the taxpayer £940m by 2017 and the price has since edged up still further.”

This included a new bus that London didn’t need and that current London Major Sadiq Khan is no longer commissioning because it is so costly; a failed plan to build The Garden Bridge over The Thames; and the eye-wateringly expensive Olympic Stadium, which, despite now being home to West Ham football club, is hemorrhaging money.

During his time as Foreign Secretary, Johnson was at the centre of several “misdemeanours” such as referring to black people as “piccanninnies” with “watermelon smiles” and comparing Muslim women wearing veils to “bank robbers” and “letter boxes.” He of course also led the Leave campaign with its famous promise/lie of £350 million a week being diverted into NHS if we leave the EU painted on the side of a bus, and when the Leave campaign actually won, he quietly slipped into the background. Biding his time worked: judge Theresa May as you will but she had an impossible job trying to sort out Brexit with her own party at war with itself. Now she can be the scapegoat, with Boris hopeful he will swoop in to “save the day.”

So despite all these horrendous, public failings, why is it that Boris is still frontrunner to become PM and viewed with warm affection by many? In one word, persona. Boris is not stupid. Matt Charlton wrote an article for VICE this year which perfectly shines a light on how and why Boris has captivated the British public. And it all started with being enabled by the media, and particularly one beloved television show in the UK which introduced a viewing public to his “charm”: satirical comedy panel show Have I Got News for You. As Charlton writes:

He was buffoonish, cartoonish, clumsily charming, unthreatening—as if he’d been drawn freehand for his own Beano comic strip. He embodied every preconception that a metropolitan liberal audience had of a Tory MP, and was great value chair-fodder on any TV show which happened to shove him in the general direction of a camera. Most of all, though, he was—either wittingly or unwittingly—funny.

LOL. What a character. But character is exactly the word, don’t be fooled into thinking this is the real Boris. As Charlton goes on to say:

Since then, I have heard a lot of writers room anecdotes about Boris—the way he dishevels his hair before the cameras start rolling; how he purposely slightly untucks his shirt and sends his tie a touch askew before he walks onto a stage. There’s footage from 2016 showing him outside the now infamous Brexit Bus, his bumbling persona suddenly dropping as he finished his time on camera—the calculating, impersonal Johnson then wrangling his minions as he planned his next move.

So what sort of novel would a man like this have written? Why, one that is “sexist, racist fundamentally undiplomatic, and stars a tousled, bicycling Tory MP who believes everything is up for grabs” according to Mark Lawson, who ripped it apart for the Guardian this week. Published in 2004, Seventy Two Virgins has largely slipped under the radar under recently. 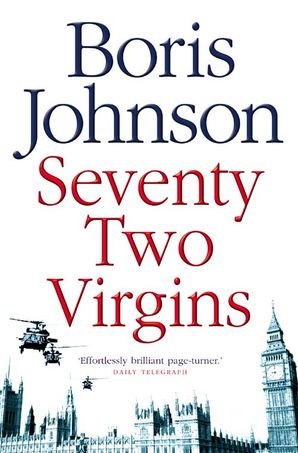 Publisher HarperCollins describe it as “a comic political novel, with similar appeal to Stephen Fry or Ben Elton.” I’m sure Fry and Elton, known for their liberal stances, love that comparison but back when the book was originally published fifteen years ago the world was more naïve and Boris was an unknown quantity. Lawson describes the plot thus:

A hostage thriller in which an ambulance plays the role of the wooden horse the Greeks built to fool the Trojans, Seventy-Two Virgins is structurally audacious. Its 336 pages cover just three and a half hours in Westminster, during which a terrorist group of suicide bombers, whom the narrative voice calls “Islamofascists,” targets the visiting US president, as he gives a speech in Westminster Hall.

This assassination-massacre plan is stumbled on by Roger Barlow, a bicycling Tory MP known for tousled hair, classical allusions, and flapping shirt-tails. As the story develops, he sees the chance to make himself such a global hero that the media will judge it futile to publish the latest thing he doesn’t want to tell his wife.

Does that character sound familiar at all…? But of course, just like Boris himself, the book received a mixed reception. Many (read into that the ring-leaning media) admired his comic prowess and charm. The Daily Telegraph, who he writes a regular column for said ‘This is a comic novel, but Johnson is never far away from making serious points, which he leads us towards with admirable stealth.’ The Evening Standard said ‘it as been assembled with skill and terrific energy and will lift the ,morale in the soul of many a fair-minded Englishman’

However, Lawson addressed it’s more insidious side in the Guardian:

Arabs are casually noted to have “hook noses” and “slanty eyes”; a mixed-race Briton is called “coffee-coloured”; and there are mentions of “pikeys” and people who are “half-caste”. If this prose tone sounds older than 2004, it may be because the book feels to be attempting a stylistic marriage between the upper-class farce of PG Wodehouse (1881-1975) and the anti-liberal social-sexual comedy of Tom Sharpe (1928-2013).

Just because writers from eras past could get away with this type of language doesn’t mean that in today’s politically aware climate it should be replicated, or worse, used as an excuse to justify slurs. Lawson continues by saying:

The novel’s attitude to women is so sexist that, if Johnson fails to gain the premiership, he could be a good bet to screen-write the recently announced new string of Carry On movies. I counted 20 occasions on which women enter the narrative. Each time, the narrator or a character looks them up and down, phwoaring over, to take a representative selection, “tits out,” “lustrous eyes,” “long legs,” “a mega-titted six-footer,” “loads of pretty white teeth,” “good teeth and blonde hair,” and an “unambiguously exuberant bosom.”

The book was discussed on BBC’s Newsnight Review back in 2004, as transcribed on the BBC website. Presented by Lawson at the time, guests Michael Gove (who recently got booted out of the PM race) and Oxford educated poet Tom Paulin generally regarded it well. But, surprise surprise, author, Guardian columnist (and woman) Julie Myerson did not, saying:

“I hated it. I’m amazed you all liked it. I think I quite like Boris Johnson, but it is proof of what I know already; that you can take a fairly clever person and let them go on for 300 pages and it’s not a novel. To me it’s an overextended sketch. I can’t believe you didn’t find it boring. It goes on and on and on.

“What I really dislike about it is it’s a novel for people who already know what they think about everything. It is snide, sneering and lofty. I know why you’re saying generosity, but I don’t think it is. I think it’s posing as generosity, he’s pretending he’s liberal, he’s not.”

So why have we fallen for it? Why is Boris allowed to get away with saying frankly hateful things under the banner of “comedy?” Simon Jenkins writes for the Guardian that his carefully built persona has served him well:

The Johnson personality is clearly not to be underrated. As democracy becomes less a matter of interests and resources, it falls back on secondary responses, on making people relaxed and comfortable about the world about them. Voters seem drawn to someone who does not take life too seriously, is casual about presentation and possesses eccentric unpredictability. People like laughing at politics, and Johnson appears a fellow human.

It’s just all so funny, isn’t it? Ladies and gentlemen, I give you the next Prime Minister.