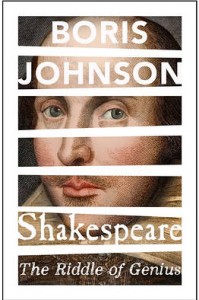 Back in May we wrote about British Prime Minister Boris Johnson’s long overdue biography making headlines, amidst accusations the PM missed important COVID meetings to put pen to paper. The pending book, titled Shakespeare: The Riddle of Genius, is now in the news again, this time due to Johnson’s “highly collaborative” writing process.

A leading Shakespeare expert, who wishes to remain anonymous, told the The Stratford-Upon-Avon Herald that he turned down an offer to “provide content” for Boris Johnson’s forthcoming book. He went on to say he had been asked by Mr Johnson’s literary agent to “semi-dictate” content to the prime minister.

It turns out that Johnson relied heavily on others when writing his previous book, The Churchill Factor. Warren Docker, Johnson’s former research assistant, told The Fence the book’s creation was a strict collaboration between himself, Johnson, and Allen George Packwood, director of the Churchill archives centre at Churchill College, Cambridge. Johnson would record interview sessions, re-word responses, and get Dockter to write it all up.

Docker insists Boris “did all the heavy lifting.” Our anonymous expert was also given some comforting words when approached for his help:

“The originality and brilliance, his agent assured me, would lie in Mr Johnson’s choice of questions to ask and in the inimitable way in which he would write up the expert answers he received.”

This did not stop him declining the opportunity.

The prospect of Johnson’s impending book and search for collaboration has been met with contempt by many Shakespearian experts. Jonathan Bate, author of The Genius of Shakespeare, told The Fence: “I’ve not been approached at all. If I find there is any plagiarism he will be hearing from my lawyers.”

A Shakespeare academic told the Guardian:

“Rather to my disappointment, I haven’t heard anything about this, directly or indirectly. Not stonewalling: I should be absolutely delighted to help puncture BJ’s undeserved reputation as a thinker.”

“My feeling is that he’s got a perfect right to write a book about Shakespeare, and I feel that Johnson’s book shouldn’t be judged before it comes. But at the same time, it does sound from the rumours as if it’s going to be ghostwritten to a rather high extent.”

If you’re a busy prime minister, why not delegate the pesky business of book writing? As the the he-shall-not-be-named expert who declined to collaborate with Johnson said:

“You have to admit it’s a brilliant system for the busy not-quite-author: asking questions viva voce and then rhetorically spicing up the answers is much quicker than actually reading books.”