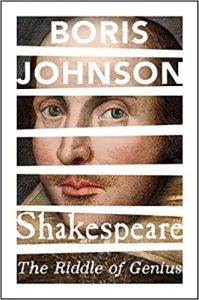 Back in July 2015, it was announced that Boris Johnson, the then Mayor of London, would be writing Shakespeare: The Riddle of Genius for which he received an advance of close to £100,000. According to publisher’s Hodder & Stoughton it “sets out to determine whether the Bard is indeed all he’s cracked up to be, and if so, why and how.”

Six years later, and there is no sign of the book—only ugly rumours suggesting the Prime Minister’s mind was more on The Bard than on the COVID pandemic in early 2020.

On February 5, Johnson gave an odd and rambling monologue about Shakespeare during the “People’s PMQs,” an online publicity event during which the Prime Minister answers question in a live video stream from pre-selected members of the general public. You can listen to the rant in question on the Independent website. Snippets include him saying:

“What an incredible thing it is to have pictures, contemporaneous pictures, of William Shakespeare and Queen Elizabeth…

“And they say, of course, that A Midsummer Night’s Dream was staged particularly for her…

“Anyway, nobody asked me that question tonight on People’s PMQs – but I’m giving you that information, absolutely free gratis, nonetheless.”

Now, Johnson’s former chief adviser Dominic Cummings, who was fired in November 2020, has appeared in front of MPs to provide damning testimony against the Prime Minister and his government. As well as criticising the disastrous herd immunity response the government supported, he also slammed the UK’s border policy, the timing of lockdowns and restrictions, and the test and trace system, saying of the Prime Minister, as reported by the BBC:

“He claimed Mr Johnson had told him he liked to be surrounded by “chaos” in Downing Street, because it meant everyone had to look to the PM “to see who is in charge.”

“Asked if he thought Mr Johnson was a “fit and proper person” to get the UK through the pandemic, Mr Cummings replied: “No.”…

On Monday, a spokesperson also denied that the Prime Minster was working on his book in early 2020 when the pandemic first came to light, saying, as reported by The Financial Times: “The prime minister has throughout been at the helm of the government’s response to the pandemic.” Johnson did, however, miss five emergency meetings to discuss the coronavirus, and in February 2020, when Britain was hit by severe flooding, he did not find the time to visit the worst affected areas.

The new book was scheduled to publish in 2016,  to mark the 400th anniversary of Shakespeare’s death. This was later changed to April 2020, but when Johnson became Prime Minister, the date moved yet again. It is currently listed as coming in March 2022 on Amazon.co.uk.

This is not Johnson’s first book. Also to his name is a biography of Winston Churchill and the odious novel Seventy Two Virgins, amongst others. Will his musings on Shakespeare ever make it to light? Perhaps best to wait until we’re no longer experiencing a global pandemic, or when he hands over the post of PM to the next unelected leader. The Metro reported last October that Johnson may in fact resign this spring because his salary is too low, writing:

“The prime minister has allegedly complained to his colleagues that he cannot live on his annual salary of £150,402 and earned more before he took up the top job in July last year. Shortly before becoming PM, Johnson earned £23,000 a month for his newspaper column in The Telegraph, on top of speeches and appearances for which he raked in hundreds of thousands of pounds. In one month alone, he reportedly received £160,000 for giving two speeches, according to the Mirror.”

Poor, penniless Boris Johnson. Wouldn’t it be a shame if he had to pay back his book advance?