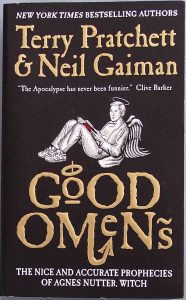 Amazon Prime’s release of the show adaptation of “Good Omens,” one of Terry Pratchett and Neil Gaiman’s well-known collaborations, has been receiving pretty good reviews but there’s one group who are really upset by its depiction of Heaven and Hell (more so Hell, really). According to the Guardian’s Allison Flood, the Return to Order group is asking its members to petition Netflix to remove the show from its streaming site. Except—Netflix isn’t streaming the show.

The group hopes the streaming platform will remove the show for its blasphemous depiction of an angel and demon’s light-hearted and adorable relationship throughout eternity, among other issues. Here’s Flood summarizing their petition:

More than 20,000 supporters have signed a petition in which they say that Good Omens is “another step to make satanism appear normal, light and acceptable,” and “mocks God’s wisdom.” God, they complain, is “voiced by a woman”—Frances McDormand—the antichrist is a “normal kid” and, most importantly, “this type of video makes light of Truth, Error, Good and Evil, and destroys the barriers of horror that society still has for the devil.”

The Return to Order group is founded on the principles of one John Horvat II, a good ole’ Christian man from Spring Grove, PA, who thinks we’ve left behind the teachings of God for hedonism, homosexuality, and fast food chains. (I presume. You read one crazy, evangelical, you’ve read ’em all.) Horvat’s teachings hope to be “a rallying cry for Americans to reject the frenetic intemperance of modern life and adopt a lifestyle of self-restraint and honor. When the world calls for vulgarity and materialism, Americans need to think more about things spiritual and sublime.”

But what’s more spiritual and sublime than two immortal beings finding common ground and walking on this Earth together, in full harmony?!

Sadder still, the group seems to have already surpassed their initial goal of 15,000 signatures and is now asking for 35,000. With over 20,000 now, it’s not clear what—other than a sign from God—they’re waiting for to send it in.