The Life and Times of a War Correspondent Turned Ambassatrix

“Dirty Wars and Polished Silver is a sharply observant and well-rendered telling of the life of a courageous international journalist and diplomat’s wife. Great story. Amusing prose. Do not miss it.” —Pittsburgh Post-Gazette

From a former Wall Street Journal foreign correspondent, an exuberant memoir of life, love, and transformation on the frontlines of conflicts around the world.

Growing up in 1970s Detroit, Lynda Schuster felt certain life was happening elsewhere. And as soon as she graduated from high school, she set out to find it.

Dirty Wars and Polished Silver is Schuster’s story of her life abroad as a foreign correspondent in war-torn countries, and, later, as the wife of a U.S. Ambassador. It chronicles her time working on a kibbutz in Israel, reporting on uprisings in Central America and a financial crisis in Mexico, dodging rocket fire in Lebanon, and grieving the loss of her first husband, a fellow reporter, who was killed only ten months after their wedding.

But even after her second marriage, to a U.S. diplomat, all the black-tie parties and personal staff and genteel “Ambassatrix School” grooming in the world could not protect her from the violence of war.

Equal parts gripping and charming, Dirty Wars and Polished Silver is a story about one woman’s quest for self-discovery—only to find herself, unexpectedly, more or less back where she started: wiser, saner, more resolved. And with all her limbs intact. 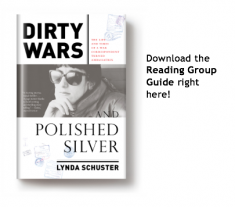 LYNDA SCHUSTER is a former foreign correspondent for The Wall Street Journal and The Christian Science Monitor, who has reported from Central and South America, Mexico, the Middle East, and Africa. Her writing has appeared in Granta, Utne Reader, The Atlantic Monthly, and The New York Times Magazine, among other. She lives in Pittsburgh with her husband and daughter.

“A gripping memoir… Raw and witty, Dirty Wars stands out due to its relatability, even as Schuster describes events far removed from the reader’s own life.” —Jewish Book Council

“A riveting international thriller… A page-turner thanks to lucid writing and thrilling storytelling.” —Kirkus, starred review

“Engaging and humane… Schuster’s humor and commonsense shine through, as well as her sense of adventure… Schuster wins you over.” —Pittsburgh Quarterly

“Pulls back the curtain…. Showcases the myriad ways in which the field of journalism has shifted since her time as a foreign correspondent.” —The Washington Diplomat

“This engaging, personal story of self-discovery will appeal to readers who enjoy memoirs of adventuresome and rebellious women.” —Library Journal

“Dirty Wars and Polished Silver is the fabulously entertaining story of Lynda Schuster’s adventures as a foreign correspondent and wife of a U. S. diplomat. It captures all the glamour, intrigue, love, and, yes, loss that’s to be found in a life lived on the frontlines, but it’s also a deliciously fun (and funny!) story of transformation. A delight from start to finish.” —Valerie Plame Wilson, author of Fair Game

“For the armchair traveler and imagined war correspondent, and for anyone who misses the tropical non-paradises of Africa and Latin America that furnished the intrigues of Graham Greene, I heartily recommend Dirty Wars and Polished Silver. It throbs with the romance, and the anguish, of a life lived in excitement and in peril, tracking sundry and dubious American missions abroad.” —Roger Lowenstein, author of When Genius Failed and America’s Bank

“A wonderful, witty ride about hurtling towards happiness and embracing maturity. If you ever wondered: What do I want and how do I find joy? Dirty Wars and Polished Silver is a book for you.” —Sonia Nazario, Pulitzer Prize–winning author of Enrique’s Journey

“Lynda Schuster’s memoir Dirty Wars and Polished Silver is the story of a woman breaking down barriers to become an accomplished war correspondent, and an on-the-ground narrative of the conflicts that wracked the world in the 1980s and -’90s. It is also a tale of love, great loss, and love again that demonstrates the resilience of the soul. I recommend it to all, but especially to those who wonder how to succeed in life by following both their head and their heart.” —Jeffrey Herbst, President and CEO, Newseum

Praise for A Burning Hunger

“As fascinating as the best novels.” —Mario Vargas Llosa

“This is an earnest and passionate historical account, crafted from meticulous research and study. It is a narrative made for captivating reading and a painful reminder of the brutality of the apartheid system. The book is a welcome addition to a much needed but historically neglected genre of struggle biography.” —Reverend Frank Chikane

“A vital reminder of one of the most intense political struggles in living memory. It’s fascinating, trumphant and ultimately very sad.” —Time Out

“Of all the valuable books I have read, Schuster’s was the first to draw me so close that I could smell the burning tyres that barricaded Soweto streets that week; I could smell the thick smoke of burning shops and police vehicles — all coupled with a family’s burning hunger for survival.” —Mercury

“A major contribution to the history of the struggle era, giving a human face to a family that was idolized by black South Africans and demonized in white South Africa.” —Business Day