Books by Barack Hussein Obama, Sr. are up for auction in the Netherlands 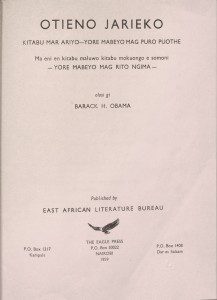 Image from the Library’s copy of “Otieno, the Wise Man,” by Barack Obama Sr. African and Middle Eastern Division, Library of Congress.

“That little book had such an impact… It changes the course of history.” That’s Mary-Jane Deeb, chief of the African and Middle Eastern Division of the Library of Congress on a series of Luo language learners written in the late 1950s by Barack Hussein Obama, Sr., President Obama’s father.

There’s some causal elision there — the books run parallel to the story of how Obama’s parents met, which is presumably what’s meant by “[changing] the course of history,” or, as Nina Siegal writes for the New York Times, “[starting] it all.”

Nonetheless, nonetheless, they’re of course a precious piece of history and very few copies are known to exist. There’s one set each at the Library of Congress and at Northwestern University. A third has been discovered by a man named Nico Wesselingh, who had worked in Kenya as a volunteer with the Dutch Ministry of Foreign Affairs in the sixties, and “bought the books to teach himself Luo while helping to establish agricultural cooperatives of small farmers.”

Wesselingh had more or less forgotten about the books until he read the president’s memoir Dreams From My Father and drew a connection. He said he hadn’t considered selling the books until recently, when he thought they might be of particular value to the American public. “There’s a saying that you don’t know what you’ve got till you lose it,” he said, “and there are a lot of people who see more clearly now that they had not only an excellent president but also someone who stood out in a very special way.”