Books about Han Solo and Lando Calrissian are assuredly (maybe?) better than a movie 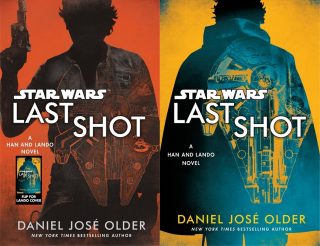 There’s a Han Solo movie coming. Like all things Star Wars, this announcement comes with excitement at the possibility of exploring a new quadrant of the galaxy… and the stomach-acidifying fear of the shit sandwich we all might be tricked into consuming. No one wants to see their childhood destroyed — presumably least of all the team at Disney l now at the helm of the Star Wars franchise.

The movie is already controversial. Fans are pissed that Han Solo doesn’t sound like Han Solo. Though the studio found a young actor who bears a certain resemblance to the paragon of (somewhat distasteful) manliness who once filled the role, the youth doesn’t have the requisite acting chops. It’s rumored that Disney had to hire an acting coach during production. Yikes.

Personally, I was disappointed by the trailer. The dialogue sounds really cliché. “If you come with us, you’re in this for good.” “Since when do you know how to fly?” And the gimmicks have become so predictable — oh look, another droid that provides comedic relief.

Of course, I’ll still go watch it. I can’t not. My inner child demands it. But to get good content, I’ll have to turn to books.

Last Tuesday, Del Rey released a new Star Wars novel featuring Han Solo and Lando Calrissian called Last Shot. It takes place a decade after the events of Return of the Jedi, when Han and Leia have made a soon-to-be-evil baby and are living happily in the Galactic Republic they’ve rebuilt. It’s all tender moments with the Solo family, until Lando shows up needing Han’s help to stop a foe they both wronged in their respective youths. While perhaps less dramatic than a Sith with galaxy-conquering aspirations, this still makes for good old pulp science fiction. It’s by New York Times bestselling author Daniel José Older, whose Shadowshaper is also entirely worth a read.

Amy Ratcliffe at Nerdist recently went through some of the older Han Solo books. Unfortunately, those have been ejected from Star Wars canon, no longer part of the official storyline of the brand. But when they were sold in the eighties, they offered fun one-off stories of Han and Lando’s adventures. It’s unclear how much of this material was adapted for the movie, but one would hope for at least a nod. As Ratcliffe writes, “Each book has a different MacGuffin, and while the romps are all fun, what I most enjoy about these Legends stories is the way they love Han and Chewbacca and dig into their exhilarating, one-jump-ahead-of-death-or-capture lifestyle.”

I couldn’t agree more. The dynamic between Han and Chewie, that make-it-or-die-trying attitude, is a hallmark of the Star Wars world.

So while my expectations are quite low for this new movie, there’s still plenty of good reading to be had.