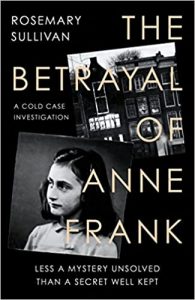 In January 2022, Dutch publisher Ambo Anthos, and English publisher HarperCollins brought out the book The Betrayal of Anne Frank: A Cold Case Investigation which controversially revealed the likely betrayer of Anne Frank and her family. Written by Rosemary Sullivan, it was based on the research of a Cold Case Team (CCT) of around 20 historians, criminologists and data specialists which included retired FBI investigator Vincent Pankoke. The team spent six years investigating, and with the help of cutting-edge Artificial Intelligence they concluded the likely suspect to be Jewish notary Arnold van den Bergh, confident by 85-87% that he was the traitor, giving up the Frank family in August 1944 in order to save his own family,

However, since after the CCT made public their findings and the book has been published, it has received intense criticism from historians, researchers, Jewish groups and from van den Bergh’s family, who dispute the conclusion.

“Given the importance of Anne Frank’s story as the central, iconic narrative of the Holocaust, meaning that Van den Bergh is now positioned as the archetypal traitor, we felt it incumbent upon us as historians to write this report.

“Our objective in writing this report is to make clear that the accusation against Van den Bergh is not convincing. Moreover, we want to emphasise that the debate on the Holocaust and the position of Jews during World War II should be approached with respect for the historical context and with nuance, rather than from an overly complacent modern perspective. For only then can we do justice to the past and also do justice to the people of the past. Including the notary Arnold van den Bergh.”

They go on to criticise the lack of evidence, assumptions and misinterpretations presented by the CCT, saying:

“The CCT has turned the betrayal of the Secret Annex into a thrilling cold case. Unfortunately, it is clear that the investigation was conducted amateurishly and, due to misinterpretation and tunnel vision, also wrongly identifies Arnold van den Bergh as Anne Frank’s betrayer.”

Arnold van den Bergh’s granddaughter, Mirjam de Gorter, also made a public statement refuting the book, in which she said:

“In any decent investigation I would have been allowed to read beforehand what was written about me and my family. There would have been room for adjustments and for open discussion based on the source material. Then you would not have been able to accuse my grandfather without the possibility of defense.
But apparently that did not fit your mold as the book never would have been published.”

The CCT has defended its findings, saying they were never conclusive and calling the criticism a witch hunt. The CCT leader, Pieter van Twisk, told Dutch broadcaster NOS that the historians’ work was “very detailed and extremely solid” and said it “gives us a number of things to think about, but for the time being I do not see that Van den Bergh can be definitively removed as the main suspect.”

However, after the report was released on 22nd March, the Dutch publisher immediately put out a statement announcing that they would be pulling the book, which read:

“Based on the conclusions of this report, we have decided that effective immediately, the book will no longer be available. We will call upon bookstores to return their stock.

“We would once again like to offer our sincere apologies to everyone who has been offended by the contents of this book.”

While it may have been pulled from sale in Holland, so far the HarperCollins edition remains available with no statement forthcoming about the book’s future. de Gorter made an impassioned plea to the publisher to pull it, saying:

“I would like to make an urgent appeal to the American publisher HarperCollins, to all other publishers involved, and to any potential filmmakers: Take the book out of circulation. Refrain from making films or television series with this story as their subject. With this story you are exploiting the name of Anne Frank, you are falsifying history, and you are contributing to great injustice.”