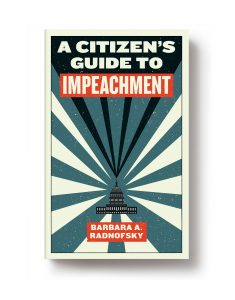 So, uh… read the news lately?

If you have, you’ve probably come across one word: Impeachment. As our president continues to astonish and worry observers all over the world, talk of how he can be removed from office has built from a whisper to a roar.

The truth is, as easy it’s become to find voices clamoring for impeachment, it’s much harder to find dispassionate, expert voices explaining, clearly and precisely, what impeachment is, how it works, and how it got into the US Consitution.

Enter Barbara A. Radnofsky. With nearly four decades of experience practicing law, Barbara is also the first woman ever to run in Texas as the Democratic nominee for US Senate or state Attorney General. She’s an expert in legal practice and history, and has written, at last, the book we all need.

That book is A Citizen’s Guide to Impeachment. Non-partisan in its outlook, and unsparing in its precision, it’s a fascinating read about this unique aspect of our democracy, and a unique handbook for citizens in a participatory government. And it hits bookstores this coming Tuesday.

Today, on the 230th birthday of America’s first Impeachment Clause, we’re happy to share this short excerpt from early in the book. Give it a read, get psyched, stay angry, and don’t look away from what’s happening. We’ll see you Tuesday.

The Birth of the American Impeachment Clause: September 8, 1787

Our Impeachment Clause—particularly the language “other high Crimes and Misdemeanors”—was born on September 8, 1787. A “Committee of Eleven” debated an earlier recommendation of a very narrow impeachment clause, with removal from office only for treason and bribery. The framers well knew the importance of every word of the clause as they debated; they recognized they were writing for posterity.

The stage was set to determine if a category should be added for wrongdoing other than treason and bribery. George Mason of Virginia, an important and consistent champion throughout the Convention of the need for impeachment, became a key speaker in this historic debate. Mason fought adamantly for impeachment. He sought earlier in the Convention to advocate for impeachment as a method to minimize the risk of electoral corruption; the fact that voters could make their own choice in reelection would not suffice. Mason had declared that “no point is of more importance” than the retaining of impeachment in the Constitution.

In the final debate of September 8, Mason referenced the British government’s ongoing impeachment trial of India Governor-General Hastings, whose alleged wrongdoings would never fit within the U.S. proposed categories of treason and bribery. Using the Hastings case as an example, Mason famously argued that limiting the Impeachment Clause to only bribery and treason “will not reach many great and dangerous offenses.” He then moved to add “maladministration” to the impeachment language. James Madison commented on the overbreadth of the word, which would allow the Senate—at their pleasure—to remove an official for any act of maladministration: “So vague a term will be equivalent to a tenure during pleasure of the Senate.” Mason withdrew his overbroad term and substituted the phrase “other high crimes and misdemeanors,” the very impeachment language used in the Hastings trial. Thus was born the most fundamental phrase in American impeachment law. But it would not become the supreme law of the land unless and until state ratifying conventions decided to ratify the Constitution.