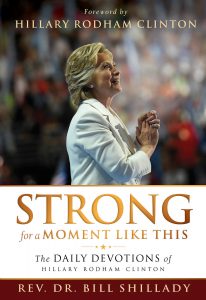 The morning after the 2016 election, the story goes, former presidential hopeful Hillary Clinton checked her email. She discovered there a note, a touching devotion, from her spiritual adviser, the Reverend Bill Shillady. This message, under the subject line “Sunday is Coming,” was published in full by CNN last month. It begins:

The note, unlike the results of the election, came as no surprise to Clinton. Shillady and a small team of other pastors were in the habit of sending a personalized devotionals to the Democratic candidate every single day for the twenty months leading up to the election. On Election Day, the coterie of holy men had sent some such devotion “almost every hour of the day,” according to the Washington Post’s Julia Zaumer.

Somewhat later, Abingdon Press announced Strong for a Moment Like This: The Daily Devotions of Hillary Rodham Clinton, a title credited to, who else, the Reverend Bill Shillady. The book “includes 365 of the more than 600 devotions written for Secretary Clinton, along with personal notes, portions of her speeches, and headlines that provide context for that day’s devotion.” The thing is, Bill Shillady and company did not themselves write the 600 devotions to HRC. They didn’t even write the 365 included in the published book. And that’s a problem.

Nonetheless, the book was released. It was only after CNN published the post-election email on August 14th that it caught the eye of Indiana pastor Matt Deuel. Deuel recognized the conciliatory words as his own, written in March 2016, and contacted CNN. This action that led to every publisher’s worst nightmare. On the eve of Daily Devotions’ release, Bill Shillady admitted that he had plagiarized the “Sunday is Coming” devotional, the book’s now-famous opening statement, and provided the following statement:

My entire approach to this book project has been to credit all of the many ministers and sources who contributed to the devotionals that were written for Hillary over the course of the campaign. In preparing the devotional on the morning of November 9, I was determined to provide comfort with the familiar adage that “It’s Friday But Sunday is Coming.” I searched for passages that offered perspective of this theme. I am now stunned to realize the similarity between Matt Deuel’s blog sermon and my own. Clearly, portions of my devotional that day incorporate his exact words. Matt and I have spoken. He was extremely gracious and understanding. I have assured him he will receive full credit moving forward.

Of course, the eve of a book’s release is several months too late. Thousands of copies of The Daily Devotions were out there. Diligent Barnes & Noble booksellers had already begun nursing their 20% OFF New Release sticker blisters. Abingdon Press did all it could, announcing that future printings of the book would properly credit Deuel for his contribution. Many fingers were crossed.

To no avail. The worst was yet to come.

In a report filed yesterday, September 5th, Zaumer reports that the “Sunday is Coming” kerfuffle was only the beginning. According to Reverend Brian K. Milford, president of Abingdon, following the initial roll-out nightmare, the press “initiated an extensive review of the book and was alarmed to discover other content unattributed by the author.”

“Consequently,” he continues, “we have discontinued sales, will remove existing copies from all sales outlets, and will have them destroyed along with our existing inventory.” Good on him.

As for Shillady, the reverend provided the following comment: “I deeply regret my actions. I was wrong and there is no excuse for it. I apologize to those whose work I mistakenly did not attribute. I apologize to those I have disappointed, including Secretary Hillary Clinton, Abingdon Press, and all the writers and others who have helped me publish and promote this book. I ask for everyone’s forgiveness.”