The story of the ignorance that led us here to this small bit of good news is nearly unbelievable. It’s a stupid, regrettable path we, America 2017, have been forced to walk along, foraging for Good, but here we are walking, foraging. Because we need the Good, and we need it right now.

So here we are. As we all know, President-elect Donald Trump seemingly had no idea who Civil Rights hero and Congressperson John Lewis was at that fateful moment when he, smug and orange all over, tweeted that the Georgia representative who walked alongside Dr. Martin Luther King, Jr. is “all talk, talk talk — no action” and that he “should spend more time on fixing and helping his district.”

The tweets came in response to Lewis’s decision to skip out on Trump’s inauguration on account of the fact that Trump is, in his opinion, an illegitimate president. Intentionally or not, Trump followed his insults by canceling his planned trip to the Smithsonian Museum of African American History and Culture on Martin Luther King Day due to “scheduling conflicts.”

As a result of all this, some interesting news: nearly sixty Democrats have now vowed to follow Lewis’s lead in steering clear of D.C. on inauguration day, which is now looking to be a pretty dismal affair for everyone involved. And some—finally—good news: John Lewis’s books, according to CBS News, have since risen to bestselling heights:

Support for Lewis among Democrats sent sales of his most popular books soaring late Saturday and early Sunday. A collection of his “March” trilogy” ranked no. 1 on Amazon, and its individual volumes also charted high. “Walking with the Wind: A Memoir of the Movement” ranked number two. 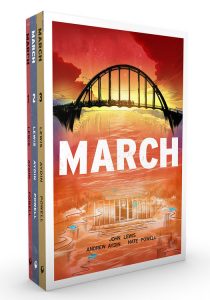 At the moment of this writing, both books are holding strong in Amazon’s top 100. March, a three-volume graphic novel depiction of the Civil Rights Movement, is slotted at #11. Walking in the Wind, Lewis’s personal memoir of a life fighting for Civil Rights is at #45. Both titles are sold out, and the publisher, no doubt, is rushing out a reprint.

Call me an optimist, but I say this is more good news for you. This moment is the perfect time to check in with your local bookseller. Call them, tell them you love them, ask them about getting the legendary John Lewis’s important books, ask them about other books you like, visit them, go to an event — and buy books from them. Spin Trump’s hate and ignorance into a positive force in your community, however bleak the backstory.