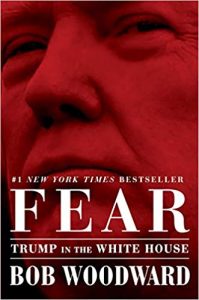 What comes after fear? Horror? Numbness? Tragedy? Something in between—say, a holding pattern of dazed, ambient anxiety?

Better figure that out soon, because legendary reporter of Watergate fame, Bob Woodward, is apparently hard at work on his follow-up to his blockbuster 2018 exposé of the Trump administration, Fear: Trump in the White House.

And this time, unlike with Fear, Woodward apparently has interviewed the man himself: Donald Trump. After one such interview, the Guardian reports, Trump said, “I was interviewed by a very, very good writer, reporter. I can say Bob Woodward. He said he’s doing something and this time I said, ‘Maybe I’ll sit down.’”

Bodes well! Personally, we just think it’s about time to hear Trump’s side of the story. Perhaps; we could humanize him? Two sides to every story, as they say!

Despite how eerie it felt to type out that last graf of sarcasm (they’ll get it, right?! My rapt and faithful MobyLives audience will understand I’m being sarcastic, right???), Woodward certainly seems to be dangerously close to hopping on that unsavory train. He noted “too many people have lost their perspective and become emotionally unhinged about Trump,” but he is here to tell us “what really happened.”

Although this seems out of character for the man who broke Watergate, Woodward has not exactly been doing himself any favors in the recent months. At an event promoting Megan Twohey and Jodi Kantor’s She Said, he reportedly interrupted and talked over his subjects repeatedly, and threw down the ever-stimulating hypothetical of Hollywood producer, Harvey Weinstein, perhaps just being guilty of “weird foreplay.”

Trump’s current chumminess with the reporter could either be a case of Trump’s bottomless ability to abruptly about-face on any previous target of derision as soon as they give him an audience—remember when he called Barack Obama a “great man” for whom he had “great respect” after their Oval Office meeting?—, or… it could be the warning signs of a decidedly less alarming follow-up to Fear.

And just in time for when the president is actually being impeached and initiating acts of war. Hm!

Anyhow, back to my dazed, ambient anxiety.