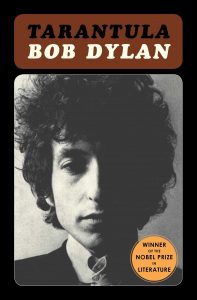 At last, the art of Nobel-prize-winning literary icon Bob Dylan can be encountered in a new format … audio.

That’s because Simon & Schuster has announced that they will release an audio version of the experimental volume on December 3, timed as a perfect holiday gift for the Dylan-head in your life. The new audiobook will feature the vocal stylings of the actor Will Patton.

Dylan compiled Tarantula at the peak of his breakout status in 1966, and the text spent the next few years as a sought-after bootleg item until being properly published in 1971.

As AP reports of the news, and the books original reception:

By 1971, Dylan’s influence had waned and reviewers were unimpressed. Village Voice critic Robert Christgau called Tarantula an unsatisfying and aimless throwback to Dylan’s 1960s writings, and Dylan himself would say the book was his manager’s idea, although it still has a cult following.

Prepare to fully optimize your life by listening to lines such as, “now’s not the time to get silly, so wear your big boots and jump on the garbage clowns,” as you do the dishes or go to the gym.