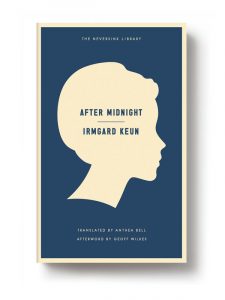 For six years late in her life, the German author Irmgard Keun lived in the psychiatric ward in a hospital in Bonn. After being discharged in 1972 she lived an impoverished existence in a small studio apartment. Everyone had forgotten her wildly bestselling, radically feminist novels of the Weimar Republic. Everyone had forgotten her brilliant, heartbreaking books about the Nazi regime, or her death-defying acts of political bravery. Only at the very end of her life, after an article article in Stern, did Germany realize Keun’s true literary importance as one of the country’s most stylish, groundbreaking, and morally courageous authors. In 1931, at the age of 26, Keun burst into the German literary scene with the novels Gilgi and The Artificial Silk Girl. These daring, provocative stories portrayed young women shedding conventional gender roles and adopting more modern and urban attitudes towards love and life. They quickly became bestsellers, but their success was short-lived—dubbed “anti-German” by the Nazis, they were both blacklisted. After a defiant and doomed (as she was well aware) lawsuit against The Gestapo for lost earnings, Keun was forced into exile, and promptly divorced by her Nazi-sympathizing husband. While in exile she became associated with a number of prominent exiled German authors including Stefan Zweig, Ernst Weiss, and Heinrich Mann. During this time she lived  in numerous countries including France, Poland, Switzerland, and the United States, and became romantically involved with the writer Joseph Roth. In 1940 Keun arranged for a newspaper to report that she had committed suicide in response to the fall of France; she used this cover as a means to smuggle herself back into Germany where she lived out the remainder of the war under a false identiy. Astonishingly, it was during this turbulent period that Keun wrote two of her literary masterpieces: Child of All Nations, the story of a child living in exile, and After Midnight, one of the most vivid and unsettling portraits of life in German during the Nazi regime ever written.

Much fiction has been written about the Nazis in the years since World War II, but it is incredibly rare to have a novelist of Keun’s talents and first-hand knowledge describe the day-to-day reality of an evil empire while it was still in power. After Midnight is not a story written with the comforting hindsight of history. It is a snapshot of a quotidian nightmare. With deft touches and sharp detail it describes the experiences of a young woman in Frankfurt on the day, and night, of a Hitler motorcade. It is subtle, vivid, sometimes even comic, but in the shadows you can see the terrible mechanizations in motion. The Sunday Telegraph wrote about the novel, “I cannot think of anything else that conjures up so powerfully the atmosphere of a nation turned insane,” and The Manchester Evening News wrote “”You can feel the creeping evil slowly infiltrate everyday existence.” The Jewish Chornicle paid Keun perhaps the highest compliment one could pay a German writer writing after 1933: Keun was “undeceived.”

Now, at last, After Midnight is available in the United States, the first title in Melville House‘s Neversink Library. The Neversink series is dedicated to “books from around the world that have been overlooked, underappreciated, looked askance at, or foolishly ignored.” It’s hard to imagine a novel more fitting. The novel has been banned, its author exiled and forgotten. Now it is back.

Here is what the critics are saying about it.

“Explosive….Even reading After Midnight today feels dangerous. I kept turning to the copyright page, unable to believe that such a sexually and politically frank book could have been published in 1937….Keun has an amazing gift for exposing the conflict at the heart of the average citizen, whose naivete is eventually and sometimes violently stripped away….After Midnight haunts far beyond its final page.

If the original Nach Mitternacht is as lively as Anthea Bell’s snappy English translation, Keun was not only a great satirist but also a great stylist. Now published for the first time in the United States, After Midnight is a sharp, vivid and uncompromising read on an impossible subject….[A] slim but important novel.

[Irmgard Keun’s] stunning works of literature are searing satires of life under the Third Reich in which fascist ideology is subtly and hilariously subverted, Nazi racism pilloried…The overwhelming power of Keun’s work lies in her surprisingly raw, witty, and resonant feminine voices.

In addition to being an excellent work, After Midnight is a superb start to… Melville House’s Neversink Library.