Bill O’Reilly could really go for a felafel right now.

On the one hand, he got to meet Melville House author The Pope, whose people were quick to clarify “that no official audience with Mr. O’Reilly was scheduled or would occur.” Nonetheless, the handshake was a coup for O’Reilly, who has in the past made a spectacle of himself by fuckwadsplaining Christianity to the pontiff.

On the other hand, O’Reilly also got canned Wednesday by 21st Century Fox, of which Fox News is a subsidiary. And it’s about time — the guy has been making America dumber, meaner, and worse-off for years, endlessly shilling for a half-baked politics of pettiness, cruelty, and indifference to the truth.

None of that’s what got him sent packing, of course. At least not directly. Instead, O’Reilly—a floppy sac of farts whom the gods of the underworld disguised as a human being lest chaos perish from the earth—was ousted after a campaign successfully pressured numerous advertisers to abandon his show. The movement gained strength earlier this month, after reporting by Emily Steele and Michael S. Schmidt that O’Reilly’s network has had to pay out more than thirteen million dollars to women accusing him of sexual harassment. (In one 2004 lawsuit, famously, O’Reilly was quoted as having told a woman who worked for him that he wanted to join her in a shower, “kinda’ kissing your neck from behind… and then I would take the other hand with the felafel thing and I’d just put it on your…” Which, if you don’t know what that means, I guess you may be doing it wrong?)

On the off chance you’re feeling bad for O’Reilly, you should know that, according to the terms of a recently-inked contract, he’ll receive more money for being ignominiously fired than you will ever see in your entire life. (And if that doesn’t do it, maybe think back to last year, when—and heads up, this is upsetting—he repeatedly failed to convince New York state courts to force his children to live with him against their own wishes, after they had watched him drag their mother down a staircase by her neck.) 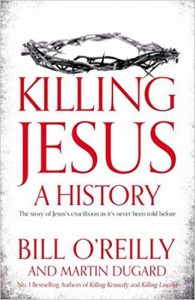 Bill O’Reilly isn’t just a TV personality, though — he’s also one of the most popular authors in America. (Many of his books are co-written with a person named Martin Dugard, whom no government documents accuse of offering to fuck people with felafel things.) So please bear all the preceding in mind as you consider the news, reported by Daniel Holloway in Variety, that both Henry Holt and Company, the publisher behind such O’Reilly bestsellers as Killing Jesus and Killing Lincoln, and the National Geographic Channel, which has adapted many of them into TV miniseries, have no intention of dropping O’Reilly. “Our plans have not changed,” a Holt spokesperson told Holloway. Jim Milliot at Publishers Weekly received a similar reply from the publisher.

For an article in the Hollywood Reporter, Andy Lewis reached out to publishing expert Peter Hildick-Smith, who noted that “casual fans and female readers could be turned off” by the recent revelations. (Also, this is hilarious. “Food industry consultant reports low approval ratings for ptomaine poisoning.” “Architecture genius describes houses that spontaneously burst into flame as ‘a big no-no.’” For that matter, “Professor of religion suggests famously nice Pope not eager for private meeting with ‘felafel thing’ guy who abused his wife in front of their kids.”)

Nothing does more to clarify what’s happening here than the fact that the National Geographic Channel, which is standing by its man, is also owned by 21st Century Fox — the same organization that just fired O’Reilly in its capacity as Fox News’s parent company. As O’Reilly’s career illustrates so clearly, the people who run these companies will happily ignore any problem that’s not blocking the flow of capital. Luckily, the folks who targeted the revenue from his Fox News show don’t look tired from here.

That blockage may yet come, and both companies would do well to drop O’Reilly now — they’ve squeezed a lot of milk from him already, and his career’s headed nowhere but down. We’ve written about this kind of thing before, and—sorry if this sounds smug, but—we were tooootally right. O’Reilly, of course, is no Milo Yiannopoulos — he’s a far more successful, influential, and, sigh, mainstream figure. But having deeper to sink is no measure of seaworthiness.